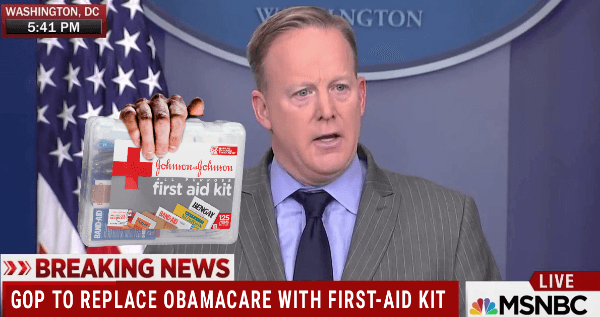 Current White House Press Secretary Sean Spicer announced yesterday that Republicans in the senate plan to repeal Obamacare and replace it with a first aid kit from the camping section of Walmart.

“Anybody that actually thought President Trump would get rid of Obamacare without having a suitable replacement ready to go, boy, how does the egg on your face taste?” said Spicer, antagonistically. “Thanks to the Walmart Supercenter on Georgia Ave. we now have a 125 piece Johnson & Johnson Red Cross All Purpose First Aid Kit, and are fully prepared to deal with any minor cuts, burns or abrasions that the 30 million people currently on Obamacare may suffer from and – fingers crossed – we might even be able to treat a sprain or two!”

Spicer went on to clarify that the government had purchased one 125 piece first aid kit for the 30 million members affected by the ACA repeal to share, and not 30 million separate first aid kits as some had initially hoped. “This one kit has to be enough for everyone so it’s important that nobody take anything unless they really need it,” said Spicer. “If your wound is already scabbing over, leave the band-aids for those that are still bleeding.”

The news that the Senate would approve such an underwhelming replacement for Obamacare was met with widespread disappointment, something Spicer seemed to sympathize with. “I understand that this solution isn’t perfect,” said Spicer in a profound show of human decency. “I myself was hoping that we were going to replace Obamacare with the Affordable Care Act I had heard so much about. Come to find out they’re the same exact thing. Mind blown!”

“Unfortunately,” continued Spicer, “We needed to use some of the funds we had planned on using to replace Obamacare for the new border wall. But don’t worry, Mexico is totally going to reimburse us as soon as the wall is built so expect that first aid kit to get upgraded to a crash cart around 2026 or so!”

Spicer ended the press conference by assuring everyone that the first aid kid the GOP had purchased was the biggest, most expensive one that Walmart had in stock – a claim that even a cursory glance at the Walmart website shows to be false – before throwing what looked to be a small glass capsule at the floor and disappearing into a cloud of smoke.