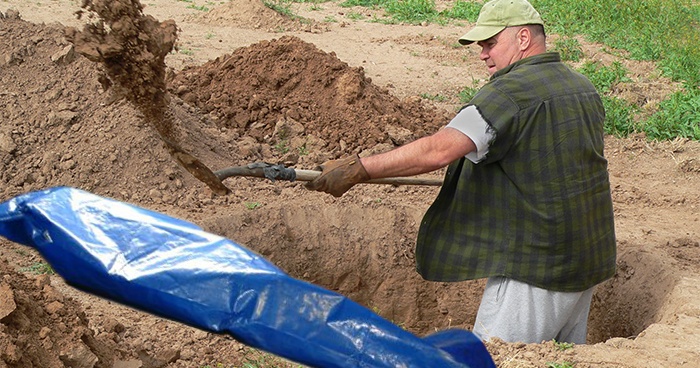 The unthinkable has happened – your son has died. You’re heartbroken, despondent and rudderless. Worse yet, your son was a good-for-nothing millennial leech, leaving you with the burden of paying what he owes and disposing of his corpse.

We understand, and Doug Constable assembled this helpful list of ways to dispose of the indebted meat vessel you once loved:

1. Throw him out with the trash:

This one is particularly good if you’re still harboring resentment at your son’s choice of school. In-state tuition would have left him debt free, but he just had to get that fancy graphic design degree, didn’t he? Just toss him out, like the garbage that he is.

Do you pride yourself on being a pragmatist? Why not kill two birds with one stone – you don’t want to pay to bury your burden of a son, and your dogs sure are tired of dry, flavorless kibble. We recommend cutting your son into manageable bites to avoid having another corpse to be rid of.

For the father who loves his grill, why not try a home cremation? All you need is an oil drum and some kerosene. Get a good, hot fire going and just stuff his worthless body on in there! Your son may have opted to buy his furniture pre-assembled instead of building it himself in life, but in death, he’s doing out the Home Improvement way.

For the mother who loves her garden, why not try burying your son in the back yard? He will decompose and enrich your soil with all kinds of nutrients, providing the genuine value he was never capable of while alive!

5. Leave him exposed in the sun:

Did your son choose to burden the family with student loan debt over a god damned Classics degree? Why not give him the non-burial of Polynices? Leave him exposed in a field for the sun and vermin to have at! Bonus point: Your daughter might reconsider that gap year abroad after she has to watch his corpse slowly rot outside her window.

6. Shellac and use as a decoration at the holidays:

For the crafty mother with time on her hands, try shellacking his body to use for decorative purposes. You’ll have all kinds of fun decorating him throughout the year; Santa hats at Christmas, Jason masks at Halloween, leaves and fake squirrels for Arbor Day – maybe even the leather bomber jacket he insisted on spending $350 on at a high end thrift shop!

Was your son a fisherman? A sailor? Had he ever used his hands for an honest days work in his life? Did he even know what a callus was? Throw him overboard!

8. Use him to fake your own death:

Are you trying to escape the debt your awful son left you with? Do people always say the two of you look quite similar? Make use of his body to fake your own death! Write a suicide note, drop his worthless body off the top of a high building, and skip town! Your friends might miss you, but they don’t know what you’ve been through.

This one’s a bit of fun – rig up your son’s body Weekend At Bernie’s style (he probably never even saw that movie anyway, but you know what he did see? All 95 hours of Matrjoschka at the MOMA).

Get him onto a public bus, wait a few stops then leave him there! It will take the driver hours to realize there’s a dead body on board, and by then he’ll have no idea where he even came from. The city will pay to bury him in an unmarked grave on a secret island, and that will be the end of it.

10. Sell him back to his creditors:

This will probably take some work, but if you’re persistent enough, your son’s debtors will accept parts of his body as a form of payment! Spend some time with a scalpel and some bags, make a few calls, and your son’s corpse can fetch you as much as $4,000 – more than he contributed to society in all 26 years of that succubus’ life.