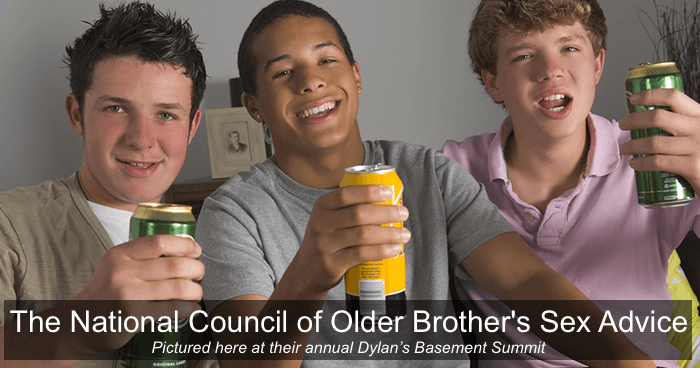 The National Council of Older Brother’s Sex Advice released a report this past weekend in which they stated that the chances of pregnancy drop by 100% if the woman is on top.

“It’s basic gravity, dumbass,” said 17-year-old NCOBSA rep Trevor Worth. “How can your [semen] get all the way up through her guts like that? I mean, duh.”

Scientists at the NCOBSA say that their study was backed by dozens upon dozens of first-hand experiences. “Dude, I’ve [had intercourse] with, like, fifty [women],” said Dr. Randy Carter, head researcher at the council and noted “Call of Duty” enthusiast. “And I’ve [ejaculated] in them when they were riding my [penis] every time. Never got any [women] pregnant.”

When asked to name the women he allegedly had sex with, Carter punched a reporter in the arm and told him to shut up, adding “It’s none of your business anyways, gaywad.”

The report also included the findings gathered in several other experiments the NCOBSA conducted. The council has also concluded that “condoms are dumb,” “[women] on the pill just want to [have intercourse with] pretty much anyone,” and that “[having intercourse with] a [woman] while she’s on her period means you’re gross and weird.”

It should be noted that several other groups have debated the findings, including the Cool Aunts of America’s Sexual Health Center, who said that the “woman on top” theory is entirely unfounded, and if you keep talking about it in front of your cousin, will probably lower your chances of getting that travel abroad money from me and your uncle, Trevor.