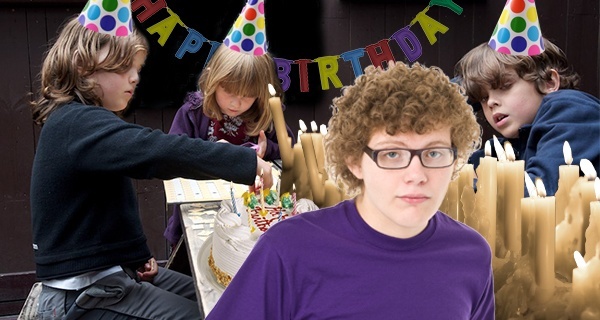 Local 11-year-old Ethan Siegal threw a “candle making” birthday party at his New Hampshire home this past Saturday afternoon, according to disgruntled classmates.

Siegal – who habitually wears Chinos and water shoes to school despite living nowhere near a lake or ocean – has reportedly thrown other “really bizarre” birthday parties, say school friends. “In fourth grade, Ethan had a guy come to his house and teach us about owls,” said fellow sixth-grader Trent Whaley. “And in third grade, we had to do a scavenger hunt. In Latin.”

According to sources close to the family, Siegal’s parents often opted to bring him to adult social functions instead of getting a babysitter. “We just have Ethan,” stated his mother, Anne, “So it was important to us to raise him to be able to have adult conversations, even as a child. If we had friends over for dinner to talk at length about politics, you can bet Ethan was there at the table with us.”

When asked if she thought this had potentially turned Ethan into an ‘awkard, mean weirdo’ (as accused by his classmates), Anne said, “If Ethan marches to the beat of his own drum, then I feel I’ve succeeded as a parent.”

When questioned as to why he and his classmates continue attending Siegal’s birthday parties, Whaley elaborated, “He’s the only kid who’s allowed to have all the boys in the class sleep over. It’s always a ton of fun at night if we can just manage to slog through whatever horrible activity Ethan and his mom have planned.”

Siegal reported that next year, his plans include bringing the entire seventh grade class on a three hour drive to Plymouth Plantation. “Either that or this old leather tannery in our town. That would be awesome.“