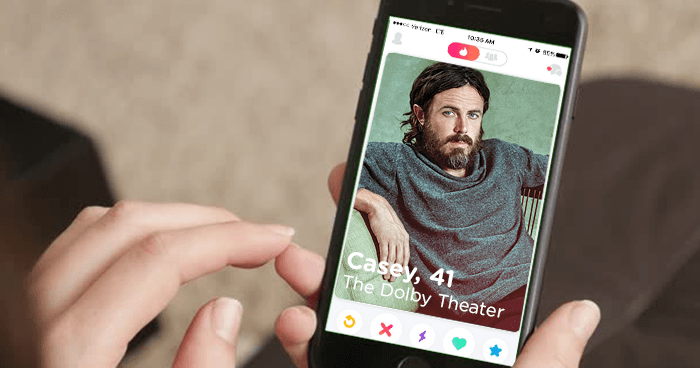 Numerous female Tinder users in the greater Los Angeles area have recently reported that they are being harassed with unwanted pictures from a user by the name of Casey, age 41. The women all seem to tell the same story, in which they swipe right on a boyish looking, seemingly nice guy with a scraggly beard and kind blue eyes. Pleasantries are exchanged and small talk is made through the app’s messaging feature between the women and the man in question.

Then, without warning, the women receive a picture from the man known simply as Casey, usually in which he is in a state of undress, with his hands wrapped around his Academy Award for Best Actor in Manchester By The Sea.

The pictures are usually accompanied by a confidently inquisitive question or braggadocios statement, such as “Like what you see?” or “Impressed?” or “It’s bigger than my brother’s, I checked twice.”

“Between this town and ‘hookup culture’, I’m pretty much done with this stupid app,” said Crystal, 23. “You try to meet someone who seems nice, who is actually pretty cute, who was honestly pretty magnetic in Gone Baby Gone, and then BAM! You get a picture of his Oscar. It’s like, wow. Thanks but no thanks, creep.”

Other women echoed similar sentiments. “Is it a nice looking award? Yeah, sure,” said Lisa, 27. “But so what? Give me some context here. Don’t just show your Academy Award for Best Actor in Manchester by the Sea to a woman cold and out of nowhere. And sorry guys, but a nice Oscar isn’t everything. I met this older guy on Tinder named Cuba last year. He had a really nice Oscar, but he was the worst, totally stuck in his nineties glory days. It wasn’t worth it, like, at all.”

At a recent press conference in Hollywood, Casey stated that he felt the women’s reaction was “a little uncalled for.”

“Look, people love to exaggerate, they love to fabricate,” he claimed. “Did I send these pictures? Who’s to say? If I did, it was only because I picked up on a vibe. And yeah, maybe I did pull out my Academy Award for Best Actor in Manchester By the Sea and snap a few. But come on, you’re gonna tell me I shouldn’t be proud of this thing?”

“G’head, touch it,” he then whispered to a visibly irate KNBC Anchor Rebecca Diaz. “Don’t act like you don’t wanna.”

At press time, Casey and his lawyer were negotiating a settlement for Diaz, whose career will still most likely be over as a result of the incident.