Facebook Adds “People Who Did Not Age Well” Option To Sidebar 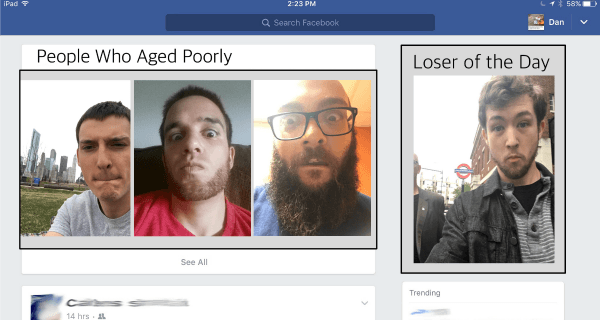 Facebook Founder and CEO Mark Zuckerberg is stealing attention away from Apple this week as he just announced his site’s newest feature: a brand-new sidebar exclusively dedicated to showing users how poorly their friends and enemies have aged over time.

“For years the site had found growth with advertising, music, and apps, but now we’re bringing Facebook back to its intended use: letting you ruthlessly judge your peers,” said Zuckerberg.

Using Facebook to shamelessly compare oneself to friends and strangers alike has been the unsung major motivator for use, and with the rapidly aging millennial demographic, features like this one are sure to keep users coming back.

“Honestly, imagine waking up every morning to see your insufferable yet inexplicably successful freshman roommate packing on some pounds or getting wrinkly before your very eyes. In my eyes, that’s better than a million tag notifications or Bejeweled Blitz requests” stated Zuckerberg.

“Unfortunately, people are a lot more likely to share successes than failures on Facebook,” says COO Sheryl Sandberg. “So it’s kind of a bonus surprise when in between the birth announcements and Instagram photos you notice your ex is single again. The PWAP (People Who Aged Poorly) button takes the randomization out of Facebook searching, actively bringing the misfortunes of others directly to your fingertips.”

“As we like to say here at Facebook,” Sandberg continued, “A misplaced sense of self-validation based on the failures of others is just a click away!”

This negative mindset has been prevalent among users of the site for years. “Within minutes of debuting the ‘like’ button people were immediately demanding a ‘dislike’ button,” said Zuckerberg. “Seriously, I say ‘hey click this when you enjoy something’ and all everyone wants is a quicker way to express hatred.”

The social media landscape is both vast and fluid, and Zuckerberg knows the importance of being vigilant and staying on the right track. While MySpace faded away as it was “a place for friends” Zuckerberg believes that keeping Facebook a bastion of hatred and schadenfreude will make his website an in-expendable commodity.

The new feature will also work in conjunction with the “On this Day” function, giving users a “Loser of the Day” to mock. “Our users used to have to do a lot of legwork to suss out the coworkers who are languishing in debilitating depression or exes who are losing their hair, and that’s our bad,” continued Zuckerberg. “Now, we funnel that information directly to you, the consumer.”

The feature is set to debut next week for users to utilize immediately, somewhere in between reposting Harambe memes and self-indulgent statuses about how technology is overtaking their lives.