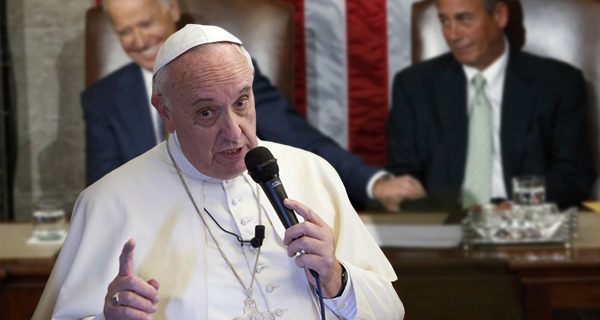 Minutes into his speech to Congress in Washington, D.C. this morning, Pope Francis was forced to go off script after running into technical difficulties with the teleprompter. As the Capitol building’s tech staff scrambled to resolve the issue, the pontiff began what ended up being a completely improvised 47-minute riff on cultural differences between the United States and Vatican City’s close neighbor, Italy.

Though initially caught off-guard by the sudden interruption, he quickly regained his footing.

“Whoops, looks like we have some technical difficulties,” he said, chuckling. “Apparently God has more important things to do, though I’m not sure what those would be exactly.”

This was met with lighthearted laughter, emboldening him to delve into more observational territory, which he sprinkled with topical humor as well. Throughout the riff, he proved himself a natural extemporaneous speaker with an astute awareness of his audience.

“As you may have heard, I’m Argentinian,” he began, “which means most of you probably think I’m Mexican, and about half of you are worrying about my plans to impregnate someone over here so that I can become an American citizen. But I assure you that can’t happen—I’m sterile. Just kidding. It’s because I’m the Pope.”

Discouraged by the mixed reaction from the room, he quickly moved onto the more neutral territory of sports.

“Speaking of balls, let’s talk about sports. Americans love baseball. They love football, basketball. If there’s a ball, they love it—except for football. Oh, excuse me—‘soccer.’ See? You won’t even acknowledge its status as a ball.

“Italians are the opposite. That’s the only ball they follow. I mean, I guess there’s one other type of ball they like—the type you put in your mouth. No, not that, you filthy people. Meat balls! Jesus, what did you think I was gonna say?”

Finally, with only a few minutes left, the teleprompter was fixed, but it was too late.

“So it says here I’m supposed to talk about the dealth penalty, abortion, global warming, yadda, yadda, yadda,” he said, rolling his eyes exaggeratedly. “But let’s call it a night. You’ve been a great crowd.”