White House Press Release Written On Back of Nuclear Codes 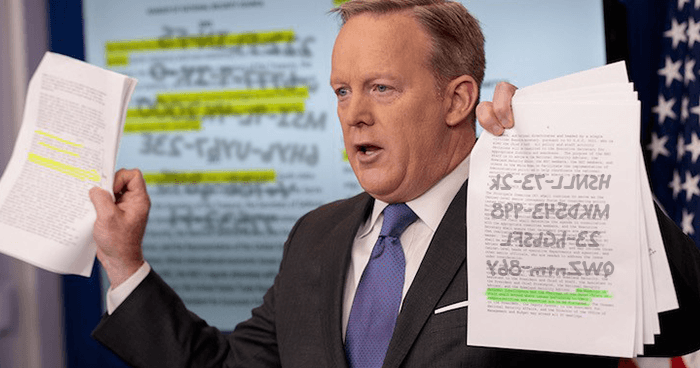 After feeling under attack from members of the mainstream media, President Trump followed through on his threats of eschewing standard press conferences in favor of hand-written press releases. He asked Press Secretary, Sean Spicer, to distribute a statement printed on the back of the nuclear launch codes.

“It was bizarre,” said Baltimore Sun reporter Angela Mastrianni. “The release, itself, was usual for this administration – a convoluted announcement, ultimately saying that the tax plan would be resubmitted in a plastic binder, instead of just a manila folder. It was the details surrounding the statement were of actual intrigue.”

“First off, most of the release was written in pencil, and there had been a number of false starts because there were eraser marks everywhere,” Jason DiAntonio of the Hartford Courant said. “It looked like someone had used a ruler to keep the lines straight, but gave up halfway through. Then on the back, someone had typed Foxtrot-Alt-Right-Kilo-Yankee-Zulu followed by a series of non-sequential numbers and letters.”

At first, reporters thought it was a hoax, not believing anyone could disseminate documents with “TOP SECRET” and “CLASSIFIED” stamped all over the page. However, the White House confirmed the reports and quickly dismissed any thoughts of impropriety.

“We have in no way jeopardized Americans,” President Trump stated in another press release written in crayon on the back of an Arby’s napkin. “Thanks to the irresponsible media, this is the only was of communicating. To suggest that we made a mistake, or put anyone at risk, is slanderous.”

Sources close to the White House said that Trump could be heard muttering “I knew I put those codes somewhere,” and “I told Pence I didn’t just lose them” while writing the response.

As of the time of the press conference, no nuclear missiles had launched. The administration suggested this was because “they had misplaced the launch sequence floppy disk decades ago.”