‘This Is What Democracy Looks Like,’ Shouts Protester In Loin Cloth And Jester Hat 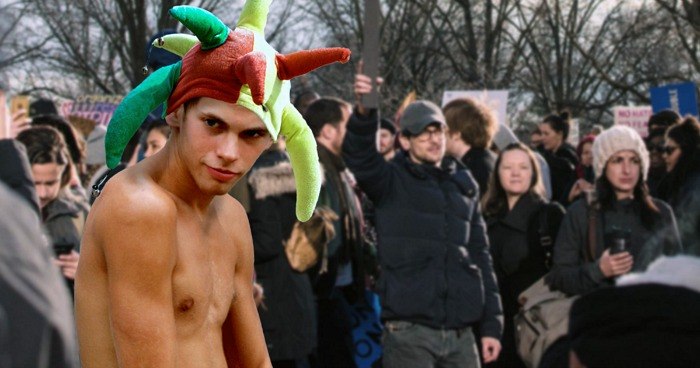 A raving man clad in a loin cloth claimed to embody the spirit of progressive America at a pro-immigrant Washington D.C. rally last weekend, according to sources who have begrudgingly accepted him as an ally.

The loin-clothed man, who identified himself as “more than a name but you can call me Jeff if you have to,” reportedly walked a loud, erratic path through Sunday’s “Welcome Here” march at the Capitol. Those present took note of his inability to keep time with organized group chants and his repeated playing of what some speculate was a cover of “We Shall Overcome” on a small kazoo.

The man’s actions came under scrutiny for annoying his fellow protesters. “I found [Jeff] to be pretty alienating,” said immigration reform activist Ellen Whitehead. “He kept shouting stuff about rising up, sticking it to the man, and how ‘they need to bring back the real Four Loko.’ He was pretty good at doing those devil stick things, but I don’t think he mentioned immigrants once.”

Responding to accusations that he did not know the purpose of the march, Jeff said, “Nah, I am about all that immigration stuff. Women’s rights. No GMOs — I’m super down with all that shit.”

“I followed Phish around one summer, too, so I know about building a community,” the jester hat-wearing activist added, before attempting to sell a passerby a guitar strap he made from a recycled seat belt.

Event organizers have offered tacit support for Jeff’s presence. “We try and be as inclusive as possible. We need all the help we can get,” said march organizer Juan Ramirez. “Even if the help is that one guy who brings his pet llamas to every protest on the East Coast, or that woman who interrupts on-location TV news interview by screaming over a reporter who supports her point of view.”

Ramirez added that he would love to see an increase in “normal” people participating in activism, but lamented that those people tend to have careers or families keeping them from attending every single event, whereas participants typified by Jeff have little else to do.

As distracting as many recalled Jeff’s demeanor to have been, others point out he was far from the only costumed character at Sunday’s event, with several marchers reporting to have witnessed multiple counter-protesters dressed as ghosts.