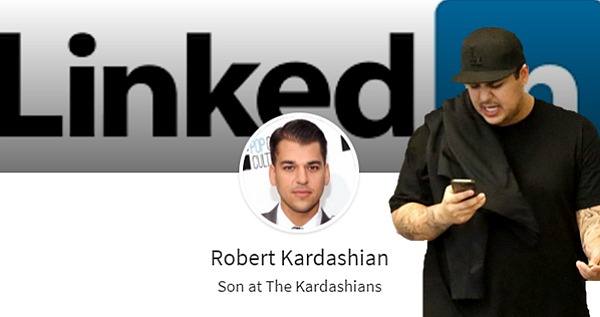 After Rob Kardashian’s public breakdowns on Instagram and Twitter last week that included posting nude photos of his ex-girlfriend Blac Chyna, the 30-year-old reality star has decided to use the employment-oriented networking site LinkedIn for a more “private, public breakdown,” the next time.

“LinkedIn would probably be the best bet for us the next time Rob feels compelled to share graphic, private images shared between him and his ex-girlfriend in an attempt to, in some way, exert control over her,” explained Kardashian’s PR representative Sandra T. Gosnell.

Kardashian’s mother, Kris Jenner, posted on Facebook early this morning about her son’s decision to redirect all future disintegrations to a more professional setting.

“We’re all concerned about Robert’s mental health and love him very much,” she wrote. “So the next time Robbie drags his ex-girlfriend, his infant child, his little sister, and Tyga into an all-out public meltdown and display of emotional and psychological abuse, we’re happy to hear that it will be delivered using a more tasteful medium, like a job search social media site.”

In a public statement released yesterday, Kardashian lamented and took responsibility for his actions.

“What I did was not right,” he said. “I need to be more private in the way that I attempt to destroy the lives of the people closest to me, and if that means sucking it up and creating a LinkedIn account, then so be it. Plus it’ll be nice to finally get some professional endorsements for my ‘social media blogging’ skills and stuff.”

At press time, a source close to the family confirmed witnessing as Kardashian signed up for various content sharing accounts with Google+, Photobucket, and Soundcloud.