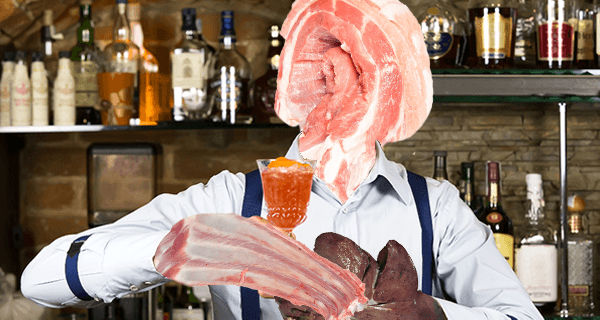 Distinguishing itself from the rest of the hip haunts in the Allston-Brighton neighborhood, which all advertise their local, organic food and drink, the Concrete Cottage nabbed headlines by taking their commitment to homegrown goods a step further. Their newest employee is a Frankenstein-like composite of organs and limbs culled from nearby grave plots and morgues, all held together by composted trash and distressed wood.

“In the past, we’ve hired kids from all over the country, who came to Boston for school, then ended up sticking around and finding a job here,” said Concrete Cottage owner Ted Greeley. “But times have changed. I want to know my employees are from around here, made from the good stuff this city has to offer.”

Since introducing the “refurbished man” to the restaurant, the Concrete Cottage has seen a massive uptick in business, with patrons positively fascinated by the cocktail-mixing creature, who, by all known laws of nature, should not exist.

“I just don’t understand how this is even possible,” said frequent visitor Sue Soroki, “but at least I know where my bartender is coming from. The owner posted all the cemeteries, hospitals and farms he grabbed his materials from on the wall.”

The new bartender, called “Jack Shit,” thanks to the restaurant’s naming contest, isn’t the talkative type—he mostly groans “Death is but a pause” or “Pain is all,” but he makes a mean Manhattan.

If you’re wondering how Greeley brought a mass of carcass fragments and trash to life, you might be out of luck.

“That’s a trade secret,” he said with a wink.