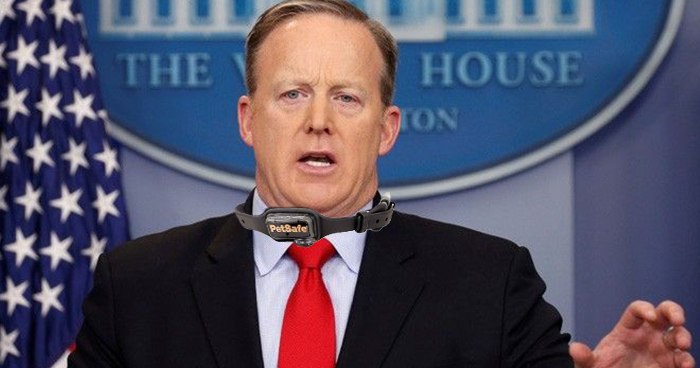 As members of the press took their seats in the James S. Brady Press Briefing Room, the air felt notably electric. Had the room gotten a fresh coat of paint? No. Was it that someone vacuumed the carpet? Probably not. Had the old gum been scraped off the podium? Nope, it was still there. Then what could it be?

“Alright, everyone sit down,” Spicer instructed the myriad reporters and pundits taking their seats. “Now before you start making terrible assumptions about the President, who is doing a fantastic job, by the way, let me address the elephant in the room. And no, I’m not talking about Russia so you can all calm down! I’m talking about the shock collar I’m wearing.”

“Are you sure the elephant in the room isn’t the president’s connection to Russia,” one reporter called out from the back of the room.

“No,” Spice boomed from his now infamous podium. “God, you people are idiots. Now, since you asked, I’ll explain why I’m wearing a shock collar.”

“We didn’t ask,” came another cry, also from the back of the room. Despite Spicer’s best efforts, as more and more reporters began to cry out, his normally stoic composure began to crack under the pressure.

“Everybody shut the fuck up and…” Spicer cried out, just before the PetSafe shock collar kicked on. “Ugggghhughughguuuuughghgh.”

As the press watched Spicer squirm on the floor, some turned away in horror, but most looked on with rapt enjoyment. Pulling himself back up using the podium as a brace, Spicer steadied himself behind the microphone and fixed his hair.

“First off, I swallowed my gum during that, but it’s no big deal,” said Spicer, throwing three more pieces into his mouth. “Second, as you can tell, the shock collar activates when I get angry or say anything the administration deems inappropriate. When either of those two things happens, the collar delivers 4500 volts directly to my neck. Questions?”

“You said the collar activates when you say something inappropriate or get angry,” said one reporter. “Does that mean that it is essentially constantly shocking you?”

“What kind of stupid question is that you…” screamed Spicer before, once again, being shocked.

As the implications seemed to dawn on the press room all at once, questions fired out at random from across the sea of angry reporters.

“Why is President Trump so set on this travel ban?”

“Does the president understand the repercussions of the AHCA?”

“Is the president aware of the geographical location of the Middle East?”

“What does Jared Kushner sound like, and where does he get his quiet, schoolboy charm from?”

Spicer appeared to fight through the seemingly endless current, managing to eek out a few expletives and choice hand gestures, before eventually succumbing to the shocks and curling into the fetal position.

“Thank you for your cooperation today,” said Reince Priebus, walking on stage holding a taser. “We’re going to change the batteries in this bad boy and we’ll see you all tomorrow.”