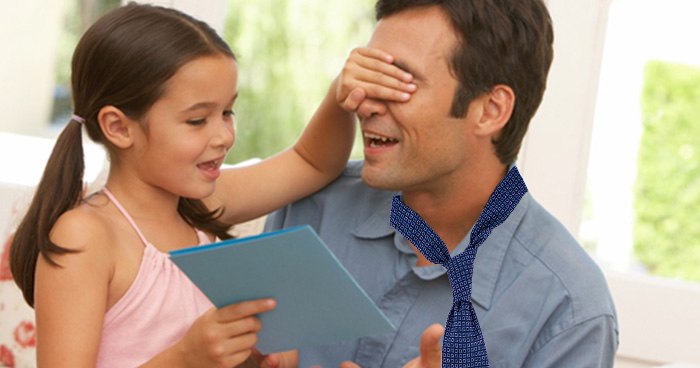 While most dads get the short end of the stick for father’s day, Wrentham, Massachusetts man Rob Marlowe is reportedly pleased with the gift his children selected for him this year.

Marlowe, who lived through both Vietnam and the Macarena, has received gifts in recent years which include a Home Depot screwdriver head replacement kit, a good-for-one-backrub coupon, and a grill brush he already owned.

This year, however, his three children say they “went all out” to buy him a $300 hand-crafted silk tie from Milan. Marlowe reportedly received the gift with enthusiasm, as he ran his fingers over the smooth silk and imagined it choking the life out of him as he swings from a reinforced shower rod.

“He hugged us real tight and told us how much this meant to him,” said oldest son Tyler. While Marlowe kissed each of his children on the cheek, being careful not to spill his coffee, the forty-three-year-old insurance rep pondered how to best tie the Javanese sailor’s knot that would knock him unconscious for a few glorious seconds in the single stall office bathroom.

“They really spared no expense with this tie,” Marlowe noted. “These Milanese people only use the strongest, most durable fibers” which is something Marlowe knows he’ll really appreciate when he’s giving a Comfort Inn door handle some roughneck business.

His six-year-old daughter Grace picked out the tasteful design: a rich deep blue with silver flecks that remind her of the stars she looks at with her daddy at night, and the stars Mr. Marlowe looks forward to seeing dance in the corners of his eyes as he violently orgasms from oxygen deprivation.

“One day, I hope my dad can teach me how to tie a perfect Windsor knot!” Tyler said, beaming with the pride of a gift successfully given. “Maybe he’ll even let me borrow this one for prom,” the teen pondered, wholly unaware that this evening, his father would tie that very same knot around his wife’s wrists, binding them tightly to their antique bed frame.

At press time, the children had already begun to discuss next year’s gift, settling on either a nice bottle of lotion or some electrical clamps.