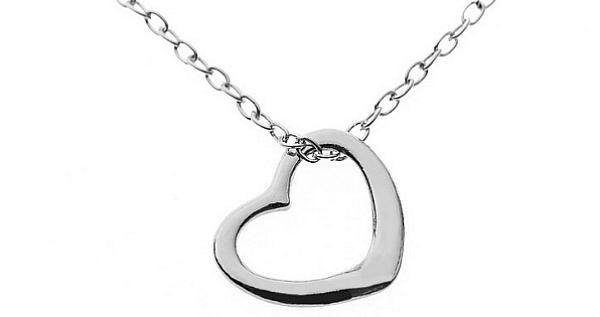 In an effort to celebrate her and all that she does for one Pflugerville, Texas family, local mom Sherry Minter was gifted with an offering of thanks and appreciation: the second-least expensive necklace an area Kohl’s department store had to offer.

“Well she still puts up with my ass after all these years, and she’s one hell of a mom too, so the gang really wanted to give her something special this Mother’s Day,” said Minter’s husband, Rob. “What better way to do that than with a heart necklace? The heart is meaningful because we love her and everything, you know?”

After an exhaustive search through countless earrings, bracelets, and “dangly hair things,” the Silver Expressions by LARocks silver-plated heart pendant on a 16-inch chain, which Rob affirms is “handcrafted, probably,” jumped out at the family after it was noticeably marked down from $59 to $17.99, a “fuckin’ sweet deal,” according to Minter’s oldest son, Kevin.

“It was between that one, and a circle thing that just said ‘Grandma’ on it,” he explained. “The circle necklace was actually five bucks cheaper, and mom really does like my Mamaw, but today is about her all the way so we sprung for the nicer option.”

“Only the best for her,” middle daughter Caitlyn added. “Well, not the best, best. That one was like, $400! I don’t know what something like that is even doing at a Kohl’s in the first place.”

Sherry Minter, an art instructor at a nearby high school who spent nearly 29 hours in labor between her three children, claims to be very appreciative of the present chosen for her earlier that morning after less than 10 minutes of searching.

“Oh yes, the necklace was very…nice,” she said, of the gift. “This will make, I think, the eighth piece of heart-shaped jewelry I’ve gotten so it’s…just really good. I do love my kids.”

Not sure how they will ever top a gift so thoughtful, the Minter family is getting a head start on the festivities, and already have next year’s Mother’s Day gift in mind.

“This year’ll be pretty tough to beat, but we’ve already got our eye on a little something she’s probably gonna shit once she sees,” Rob stated, as he used his phone to pull up an image of a heart-shaped picture frame etched with the word “Family.”