This is Part Six of the The Gumshoe Diary 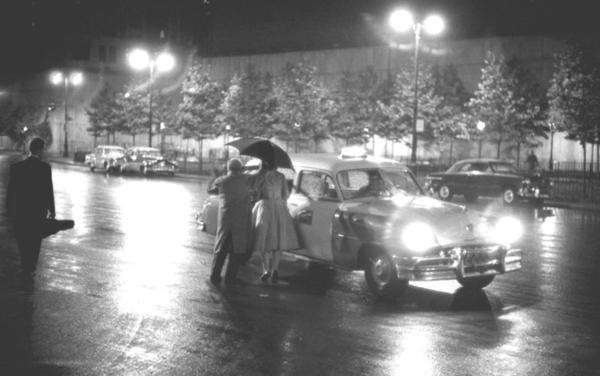 Jane and I popped our asses into the cab, and within seconds the city was zooming by like a whole bunch of buildings.

Once I knew we weren’t being tailed, I took a swig from my bottle of Debtor’s Club and turned to Jane, looking her down and up.

I gave her my fake mustache and watched as she grudgingly put it on. In this disguise she bore a striking resemblance to my mother. I told her as much while leaning in for a kiss, but she wasn’t having it.

“Listen,” she said. “How about you don’t talk until we get to Canada?”

“This is how you treat the man who saved your life? I’ve half a mind to leave you stranded in this comfortable cab!”

It was true. I only had half a mind. But Jane’s ungratitude was infair. I’d taken a boot to the balls for this woman and she didn’t even have the decency to fall in love with me. Then again, a man needs to accept that life isn’t a fairy tale. No bear’s bed is just right, and you’ll never find a cow that lays golden hot dogs.

In a huff, I kicked off my shoes, stretched my legs and rested my hot, soggy feet on the driver’s shoulders as I dozed off.

And then I had a dream.

It was a hellish dream, wet for all the wrong reasons, the kind that can make a grown man shit his boots.

I was a little boy again, running alone through the woods at night while some unknown Terror hunted me down. When my body finally ran out of gas, I turned around to face my pursuer, only to find that it was a giant neon sign with letters that spelled out “YOUR FEARS.”

I woke up kicking and screaming, causing Charlie to lose control of the wheel and crash into a tree.

Once the smoke cleared, I was relieved to discover that Jane and I were fine. And the tree would survive too, although it would probably be paralyzed for life.

But our driver was another story.

Poor Charlie. I’d taken a shining to him because like me, he was a guy I barely knew. This wasn’t the way I’d envisioned him getting killed on our trip together.

I stumbled out of the car, pulled Jane from the wreckage and took a moment to get my bearings. Near as I can spell, we were in Massachussets.

We walked for a quarter mile looking for help until we found ourselves in front of a Long John Silver’s. It would have to do. I burst through the door and grabbed the cashier by the collar.

“There’s been a horrible accident down the road and now we’d like to buy some cheap seafood!”

Jane ordered the fried haddock with a side of extra-round hushpuppies. I was on a budget, so I ordered The Lovecraft, which the Dollar Menu described as “an affordable bucket of nameless horrors from depths unfathomable.” It came with coleslaw.

It was definitely Munch Time, and I dug into my meal with the desperation of a man who’s just trying to make meats end.

“All right, look. There’s something I need to tell you.”

Easy for her to say because she spoke English.

TO BE CONTINUED in The Day-Off Dame Pt. 7