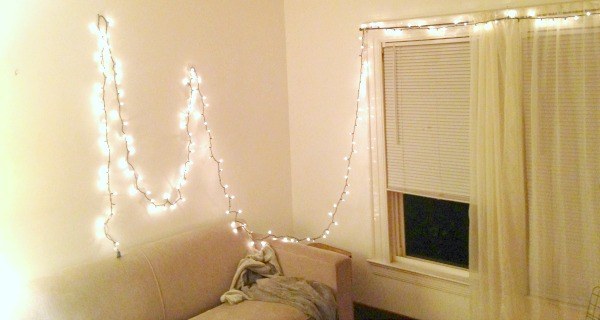 A Wisconsin man was left to redecorate his entire apartment early last week after his girlfriend of three years moved out, taking nearly everything with her. With few ideas, and a willingness to spend “no more than around $5,” Madison resident Daryl Brown declared a single strand of white Christmas lights would suffice in decorating his entire apartment.

The change to his living arrangement came somewhat abruptly, leaving Brown to think and act without much consideration, or so it seems.

Brown first encountered multiple boxes of discounted Christmas lights on a recent trip to Dollar General, which quickly became his first – and only – option he considered in regard to redecorating the place he calls home. “My ex, it feels so weird to say that, but she used to have them hung up all nice and shit,” he said. “It’s gonna look really cool.”

After weighing his many options thoroughly, Brown settled on the choice he remains confident was the correct one, before heading home with a clear idea in mind.

“They had ‘globe’ and they had ‘mini’,” the 23-year-old college senior recalled. “I went with the mini,” before adding, “I feel like I can string them up over the window in the living room, and maybe make some sort of like, wall art/lights combo that leads into the kitchen.”

When the twenty-three foot strand of lights failed to reach past the only remaining piece of furniture in the room – a five-year-old Jokkmokk table set from Ikea – Brown was forced to improvise.

“I’m actually good with it just like that,” Brown remarked of his flimsy installation, in which six of the one hundred bulbs had already somehow burned out.

While Brown remains happy with his decorative choice, the strand of lights deemed responsible for filling the literal void left by his now-ex “soulmate” remained unable to share his excitement.

“This is really not cool,” said the Christmas lights. “It’s a lot of pressure is all. I mean, lighting up the mantle for Christmas is one thing, when you’re only up for two, three weeks tops. Something tells me Daryl plans to keep me up for at least the next few years, or until a Craigslist roommate buys some Gustav Klimt posters and a floor lamp – whichever comes first.”