Sleazy Guy’s Tattoos Mean Whatever You Want Them To Mean, Baby 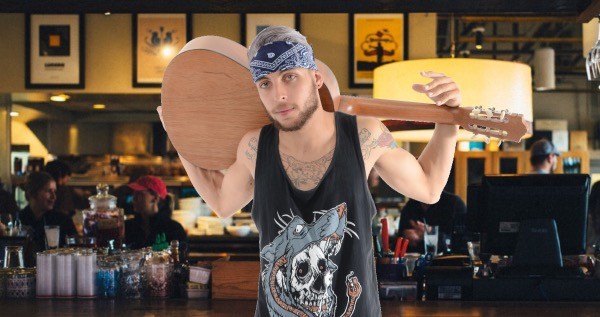 Local man and sleazebag Brett Davidson said yesterday that he has the same answer for every woman that asks him about his tattoos: “Whatever you want them to mean, baby.”

This human grime-stain and Escanaba, MI resident has been using the line for months now, with minimal success, despite his belief that it should be a “Total panty-dropper.” Davidson boasts a particularly repugnant combination of over-inflated self confidence and under-developed basic human decency that all but guarantees to ruin the night of any woman with whom he happens to cross paths.

Davidson – a self described “Pick Up Artist” and Red Pill enthusiast – has been known to carry an acoustic guitar and a mobile amp despite not being in a band.

Local women should also be warned that Davidson will often wink and raise his eyebrows repeatedly, a tactic which is said to even creep out the male bartenders.

“It’s not easy being a baller,” said Davidson. “It took me three hours to choose the perfect Hurley tank for tonight.” Davidson notes that the true difficulty lies in finding clothing that displays his bicep tattoos (a cross and a Koi), even in the dead of winter.

When asked what his tattoos actually do mean, Davidson admitted that he had simply gotten “The most generic, open-to-interpretation ink money could buy.”

“I took inspiration from Rorschach test, hoping that women would simply see whatever they wanted to see in my tats.”

Sources confirm that Davidson has been using outdated, cliche tricks and double-entendres for years since he first discovered Oldspice: Unruly hair wax.

Authorities also warn against stepping outside for a cigarette with Davidson as he is extremely likely to steer any conversation to one regarding his ability to blow steam from his vaporizer in “Dank patterns.”

End of night reports indicated that no one had fallen victim to Davidson’s greasy ways. He was last seen walking home alone blaming only himself for not bringing a second can of Axe Body Spray.