Smoking Weed With Parents “Actually Ended Up Being Pretty Weird” 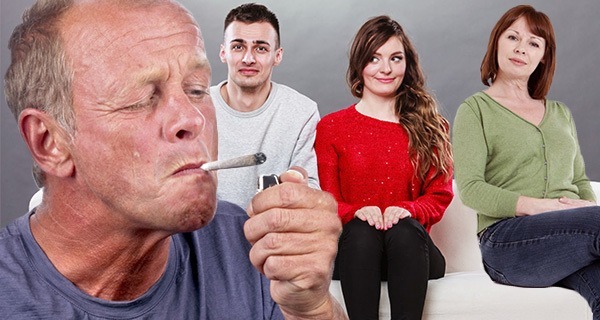 For the first time ever on a recent trip home, siblings Mariel and Evan Gaffey decided to smoke a joint with their parents, Pam and Patrick.

Evan, who is home from college for the summer, discovered the joint in his backpack. It was then that Mariel – a twenty-five-year-old who lives in Portland – suggested the family smoke the joint together.

“I mean, we’re all adults,” Mariel stated. “Our dad tells us stories about smoking in the 60’s all the time! We just got totally trashed together at our cousin’s wedding, so how weird could this be?”

According to Ethan, the youngest of the Gaffey clan, “very weird.” The evening started with their mother giddily and repeatedly exclaiming that it had been years since she “toked up,” followed by her husband wondering if he could still blow smoke rings before inhaling too sharply and devolving into a terrifying coughing fit.

“Normally, I’m a pretty jovial dude when I’m high,” said Ethan. “But I think I literally just sat on the couch for three hours without saying a single word.”

Family matriarch Pam spent “the better part of an hour” trying to remember the words to Jimmy Buffet’s “Cheeseburgers In Paradise” before wondering aloud if it was a bad idea for her to text her sister.

Even Mariel seemingly began to regret the decision after only a short time period, saying, “I thought it would be fun, but I’ve just been sitting here trying to pretend like I’m not high, even though they know that I’m high…you know?”

After stumbling through a speech about how proud he was to have a friendship with his children, Patrick Gaffey forced them to teach him how to “dab.”

The night reportedly ended with the youngest Gaffeys fleeing the kitchen to watch a movie while their mother laughed at the dinner recipe. At press time, the two had absolutely no plans to smoke with their parents ever again.