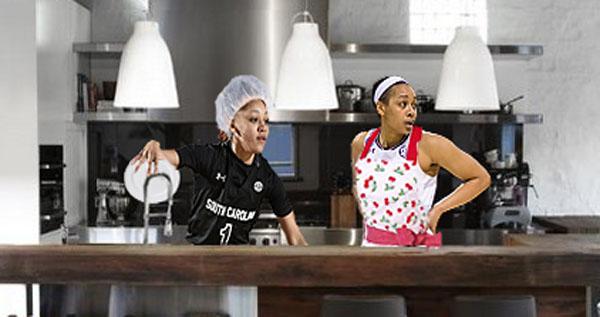 Continuing the tradition of championship sports teams visiting the White House, recently crowned NCAA champion South Carolina women’s basketball team were welcomed to the South Lawn on Friday where they were immediately handed aprons and led to the kitchen to get to work.

The women were guided on a tour of the White House that included the janitorial closets, garbage dumpsters, and ultimately, the kitchen, where they were told lunch would be served at noon, provided they worked fast enough.

“It isn’t exactly what I expected when I was told we were going to be honored at the White House,” Gamecocks star A’ja Wilson said as she got to work peeling carrots. Wilson scored 23 points in the national championship game, which President Donald Trump called “pretty impressive, for a broad.”

“I think it’s important we acknowledge female athletes and let them know that we support them all the way,” President Trump stated while waiting for the gals to bring out appetizers for him and his golfing buddies.

“This visit has been tremendously successful – I wish they could visit every day.”

The luncheon visit consisted of three courses of which the team, who were the first championship squad in school history, were rewarded the leftovers as long as they ate standing up in the kitchen, and culminated with President Trump shaking hands with head coach Dawn Staley and congratulating her on a delicious chocolate cake she helped make for dessert.

“I’m not sure what is going on,” said junior guard Allisha Gray. “I thought there was supposed to be a presentation or some kind of award. Is the photo op still happening?” Gray averaged over 13 points per game during the season, and went on to average washing four dishes per minute in the White House kitchen.

Trump did address the media towards the end of the day, noting how impressively tall these dames were and pointing out how amazing it was that they weren’t white, but still from Connecticut.