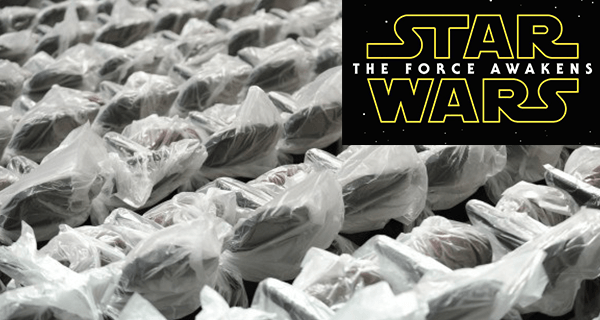 As fans wait anxiously for Star Wars: The Force Awakens to open next month, theater workers across the country are already preparing for the post-movie cleanup. “We’re starting to put plastic over all of the chairs” said Grace Fournier, an employee at AMC:Cinemagic in Portland, Maine. “Star Wars fans just can’t control themselves when they see these movies. Every bodily fluid you can imagine comes pouring out of them as soon as they see the Lucasfilm logo.”

“We learned our lesson after the Phantom Menace back in ‘99” said Howard Makin, manager of an AMC multiplex near Boston, Massachusetts, who likened the premiere of Episode I to a “Sticky mess of waste and ejaculate.”

“It had just been building up inside these geeks for 16 years” recounted Makin. “When that John Williams theme started playing, it was like a dam burst and 500 nerds shit themselves and came at the same time. The cleanup was horrible. This time though…we’ll be ready.”

Makin is overseeing the Scotchgarding of over 2,500 seats spread out across eight theaters, but says that’s only the beginning. “We’ve invested in $4,700 worth of tarps and purchased 973 packets of tissues to store in the individual cup holders. It’s a lot of money but it doesn’t come close to the net loss we sustained last time on bleach alone.”

Though most people imagine the damage is done exclusively by basement-dwelling Neckbeards, both Fournier and Makin are quick to point out that it’s not just males ruining the upholstery during showtimes. “Some female fans get just as worked up as the boys.” said Makin. “Usually it’s not a big deal but occasionally you get a gusher and then, hoo boy.”  Fournier added, “The worst is when they come in wearing one of those Slave Leia costumes. They’re so skimpy it’s like there’s no barrier between them and the seat. Anything that comes out of them is soaking right into the cushions.”

With Disney planning to release a Star Wars movie every year for the foreseeable future, the two theater workers are seeking more permanent measures to address the issue. Makin favors raising ticket prices slightly to pay for an entirely washable theater, while Fournier prefers a different approach. “Disney needs to either stop releasing all this dork-bait – like Avengers and Star Wars – or start buying theaters new seats; because if that standalone Boba Fett movie actually gets made, plastic just isn’t going to cut it.”