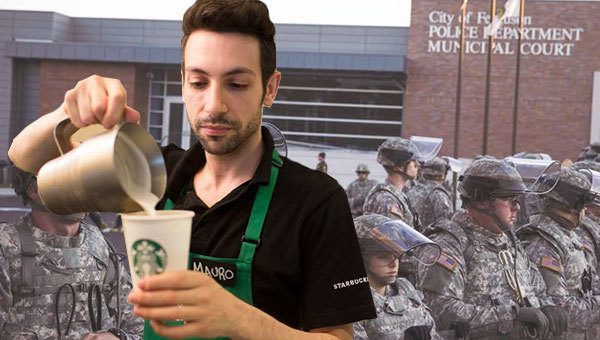 The city of Ferguson has finally appointed a successor to former Police Chief Thomas Jackson, who resigned following the scathing Justice Department report. After conducting an extensive national search, the city landed on a candidate they believe is best suited to ease tensions between its mostly white police force and the predominantly black community it serves: Kyle Spencer, a 22-year-old Starbucks barista from Hartford, CT.

While this choice has drawn wide skepticism, city officials have assured residents that Mr. Spencer’s “impressive resume” is exactly what the job needs. “Mr. Spencer has all of the credentials we’re looking for,” said Mayor James Knowles. “He works at Starbucks. What better authority to begin a well-informed dialogue about race relations in a city that’s been plagued by institutional discrimination?”

“There will be some very difficult discussions during Mr. Spencer’s first few weeks as Police Chief,” said a city official. “But nothing harder than discussing income inequality with a customer who just ordered a Skinny Cinnamon Dolce Latte on the way to dropping her kids off at private school. While writing ‘#RaceTogether’ with a Sharpie on her cup, I might add.”

“If that doesn’t make you qualified to handle one of the biggest race relations disasters in the history of the United States,” chimed in another official. “Then I don’t know what will.”

While Mr. Spencer, who’s been working part-time at Starbucks while attending college since 2012, is aware of the immense amount of work ahead, he’s confident his customer service experience will help him direct the troubled city in the right direction. “I’m pretty good under pressure. Once I worked the 6am-noon shift—completely solo—when one of our steam wands was broken. Plus the toilet was backed up. It was insane.”

However, the new Police Chief remains humbled. “To be honest, I thought the whole thing was a joke. One minute, this fat dude walks in, orders a Venti Mocha Frappuccino, asks me, ‘What do you think about race?’ The next minute, I’m in his office signing a contract.”

When asked about what concerns he had going into the job, Mr. Spencer replied, “I guess I’m kinda worried about balancing my Police Chief responsibilities with my Econ 201 course load this semester. The professor’s supposed to be a total Nazi.”

If you enjoyed this story of how one well meaning corporation is solving the race issue in America – be sure to check out 10 Starbucks Products That Exemplify Dr. King’s Vision (Sponsored by Starbucks)