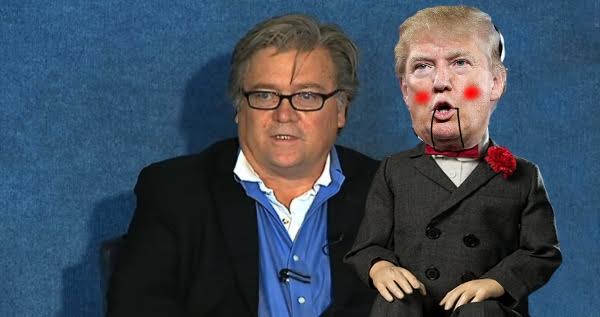 A white house staffer was forced to call 911 yesterday after chief strategist and phantom menace Steve Bannon suddenly lost control of his right arm while operating Donald Trump. The momentary loss of control caused the 267 lb puppet to collapse on top of Bannon, knocking the wind out of him and pinning him to the carpet until help could arrive.

EMTs diagnosed Bannon with a severe muscle cramp and recommended that the former Breitbart contributor keep his arm iced, and suggested that he refrain from any strenuous activities for a few days. After over two weeks of manipulating a human sized marionette stuffed to the gills with close to three hundred pounds of fecal matter, it was a suggestion Bannon was only too happy to comply with.

“I’ve had my hand shoved up Trump’s ass eight, sometimes nine hours a day every day since the inauguration,” complained Bannon as he slathered Icy Hot on his bicep.

“It gets tiring keeping my arm upright for that long while at the same time crouching under the president’s desk. By the time five o’clock rolls around I can barely muster the strength to work Donald’s mouth, which is why he gets that short bus stare sometimes. That’s usually just me shaking out a Charlie horse.”

“Someone else has to get in there for a little while and give me a break,” continued the proxy Palpatine. “Maybe Pence could do it, it’s about time that dude started pulling his weight around here. It’s either he goes elbow deep into the colon-in-chief or he gets some of those ‘Right to Life’ broads to lend me some of the babies they’re always bragging about not aborting so that I can replenish my strength. I’ve been so busy trying to get a life-like performance out of this orange Muppet that I’ve forgotten to devour my weekly ration of baby souls. I’m gonna need ‘em to get this arm healed up.”

Bannon has so far proven himself to be such an invaluable part of the Trump administration – writing all of the President’s executive orders, supplying Eric Trump with fresh blood, feeding the Donalds pet snake Nagini, etc. – that many in the GOP are concerned that team Trump can’t function without him, even if it is only for a few days. Bannon, however, is quick to wave away such concerns with a hand grown heavy under the weight of too many KFC Double Down sandwiches.

“Mike – or whomever they get to run things while I rest my arm – will be ok without me for a couple of days. I wrote down everything he needs to know on a post-it that I stuck to Jeff Sessions’ hood and all he has to do is follow the four Fs. Be fast: implement a new world order quickly before anyone can figure out how to stop it, like the mus-I mean ‘travel’ ban. Be a fascist: keep everything nationalist, right-wing and authoritarian at all times! Remember the Fuhrer: when in doubt ask WWHD or What Would Hitler Do? And lastly, try to have fun! Because what’s the point of a demagoguery if you can’t enjoy it?”