Wow! This Cake Popped Out Of A Stripper! 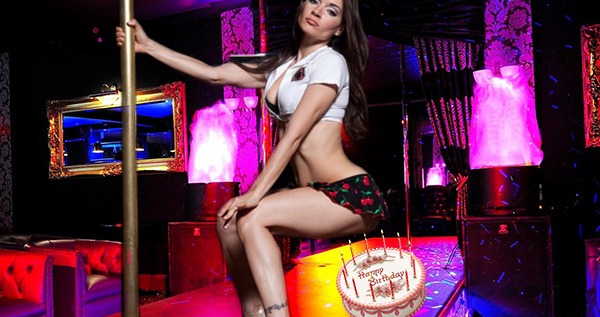 Are you tired of being afraid that your friends may buy you a stripper cake for your next wild night out? Are you still worried about the loathsome prospect that the giant cake in front of you may not actually be full of cake? This Brooklyn-based geneticist and baker has got you covered!

Meet Dr. Clifton Grayer – a man who, like you, used to live in near-constant fear that a human being may be living inside every large cake he came across. His fear was finally validated last spring when a stripper did indeed pop out of a large pink cake wheeled into a friend’s bachelor party. Said friend is currently serving 25-to-life for attempting (semi-successfully) to eat that stripper.

Dr. Grayer’s story doesn’t end there – after visiting his friend in prison, he decided the time had come to take action to avoid living in near-constant fear.

With the help of the Columbia Medical Center Genetics Lab, Dr. Grayer created the first ever cake-human hybrid – a stripper who pops out cakes! While it is still in the beta testing phase, early reports indicate that ‘Funfetti’ – as she is lovingly known around the lab – is indeed healthy and regularly pushing cakes out of every orifice of her body.

Too good to be true? Your skepticism is valid. Dr. Grayer is the first to admit that ‘Funfetti’ is not without her flaws. The cakes she has birthed have been largely undercooked and misshapen, and despite their best efforts, Grayer and his team have not yet gotten ‘Funfetti’ to stop yammering about her day and who she hates at spin class. That said, Dr. Grayer remains confident that by the end of beta testing she will be ready for market.

To Dr. Clifton Grayer we say ‘shine on, you crazy diamond.’ We’ll crack this thing yet.