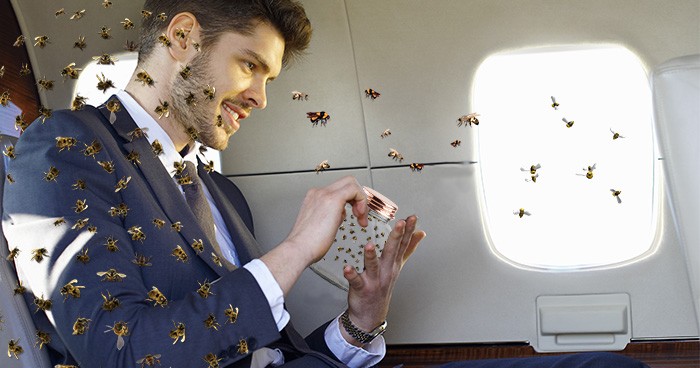 It seems like you can’t watch or read the news lately without hearing about yet another PR nightmare involving a major airline. Well, add another one to the list.

On Saturday morning, as passengers were boarding an L.A. bound flight at Phoenix’s Sky Harbor airport, 33-year-old Josh Dickinson was pulled out of line and told he would not be allowed to board. “I couldn’t believe it,” said Dickinson. “And when they told me why, I was even more shocked.”

Dickinson was told that the swarm of bees that was accompanying him was the determining factor in the airline’s decision.

“We received several complaints from passengers who were in line with Mr. Dickinson, all of which involved the bees in one way or another,” said Southwest Airlines spokesperson Brian White. “Some complained about the surprisingly loud droning noise, some were concerned about the possibility of getting stung, and a few customers who actually had been stung were demanding medical attention. For these reasons, we decided that it was best to keep Mr. Dickinson off the plane and give him a voucher for a free flight to anywhere in the continental U.S. Provided he leaves the bees at home, of course.”

Dickinson has decided not to take this lying down, and has taken steps toward suing the airline for what he feels is discrimination.

“I can’t tell you how many times I flew on airlines like Spirit or Allegiant with my bees, and they never once treated me the way Southwest did,” Dickinson told reporters. “These bees aren’t just the regular, everyday kind of bees you see people walking around the park with. These are specially trained bees that help me cope with very real trauma, but that doesn’t seem to matter to Southwest.”

Southwest Airlines is now reviewing its policies on emotional support bees to determine what number of bees might be acceptable in the future, and which types of bees are even-tempered enough to board a plane and go through a flight with a minimal number of incidents.

But for Josh and the tens of thousands of Twitter users who are supporting him with the hashtag #JoshiesBees, it’s all too little, too late.

“I just want them to do the right thing and realize that my emotional well-being is more important than whether or not some passengers have a ‘comfortable flight’ in which they ‘don’t get stung.’ That’s all,” Dickinson said. “Is that really too much to ask?”