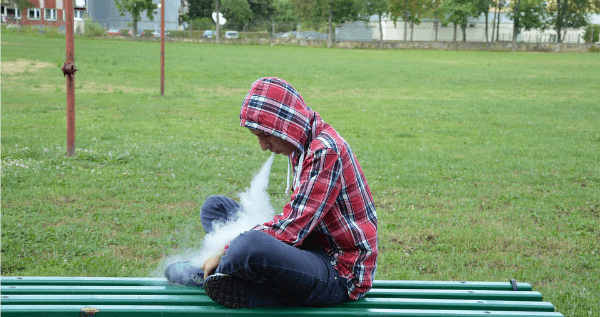 After finding incriminating evidence in their son’s room last week, Michigan parents Lynn and Walter Young were reportedly devastated to learn that their teen smoker has recently turned into the much lamer “vaper.”

The Lansing residents had suspected something was amiss after noticing the smell of cinnamon rolls wafting from the room of their son Jody, 15. Suspicions were confirmed just days ago when a routine cleaning revealed an e-cig and charger, slightly poking out of a cargo short pocket.

“At first I didn’t even know what it was, I just assumed he had gotten a new bubbler or something,” said mom, Lynn Young.

What she saw next would prove to be almost too much to bear.

“I saw two canisters of ‘juice’ that said the word ‘Amazeballz’ on them. They smelled like lemon drops…I just don’t know where we went wrong,” she said, staring at an unfixed point on the wall.

Her embarrassment quickly turned into guilt as she was left to wonder where her son could have learned such “tool-baggy” behavior.

“You do everything you think you’re supposed to do as a parent to raise your kid right, but I probably have myself to blame,” she said. “No amount of Marlboro miles could make up for all the pumpkin pie-scented candles I’ve burned over the years.”

Worried that their son may have “assed out” before his time, his parents have little choice but to accept their child for who he is, difficult as that may be.

“One day your little boy is flicking butts at those stray cats that live behind the Denny’s on Saginaw, and before you know it he’s smoking cotton candy water out of something the size of a goddamn French press,” father Walter Young said. “But what can you do?”

Despite having little-to-no respect left for their only son, the Youngs retain hope that Jody may someday return to smoking, “Even if it’s those pussy-ass menthol lights.”

“Vaping is a family shame, and we’re gonna do whatever it takes to beat this thing, together,” Mr. Young said. The couple has recently started a support group for parents of teen vapers, to help show others that they do not have to face this fresh humiliation alone.

“As a parent, you prepare yourself for certain possibilities – maybe he starts smoking, or, God forbid, gets someone pregnant – but you can never prepare yourself for news like this, you never want to think your kid might end up being lame as fuck,” said Mrs. Young. “It happened to me, and I bet there’s others out there who need help, too.”

The Adult Parents Of Teen Vapers Anonymous group meets every Tuesday evening at Trinity Methodist Church, way, way after anyone who might recognize them has left the premises for the evening.