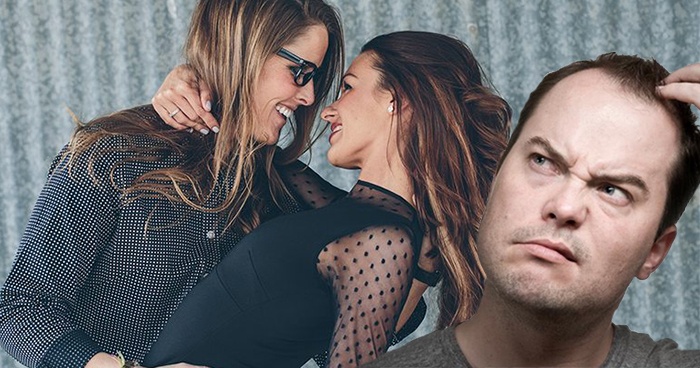 Passaic, New Jersey resident Ethan Wittmer noted to his friends last night that he “has absolutely no fucking clue how lesbians have sex.”

This admission came on the heels of Wittmer detailing his sexual conquests of the past year, which included “nailing some chick in the back of her car” and “getting a little beej from that butterface who works at the Olive Garden.”

Wittmer and his drinking buddies were reportedly partaking in the Thirsty Thursday two-for-one deal at their local watering hole when they ran into former high school classmate Alyson Serrano and her wife. After spending ten minutes deducing the relationship between the two women, Wittmer simply stated, “no fucking way.”

“Look I don’t have problems with anyone,” Wittmer stated. “But all the women I know go nuts when I take them to pound town for six or seven minutes. It makes you wonder what they hell these chicks are even doing!”

Wittmer’s favorite move in the bedroom — specifically on the pull out couch he sleeps on — is one he created and dubbed the ‘Tennessee Jackhammer.’

“OK so you take your girl, and you yank her hair back real hard – the ladies love when they know who’s in charge. Then you start off real slow for about ten seconds so she thinks she knows what’s goin on, but then – here’s where the real stuff comes in – you just absolutely rail her all of a sudden for a solid two minutes. Out of nowhere! Then ten seconds of slow, and another five minutes of The Hammer. It works every time. And if they’re really feeling it, I’ll just go for it and slip it in the back. Chicks love to be surprised!” Wittmer explained.

“I don’t mean any disrespect to these carpet munchers over here,” Wittmer continued, “but I feel bad for ’em. I guess they’re just laying there and poking at each other until one of ’em gets bored or something. They just don’t know what they’re missing!”

Wittmer then stared at his beer for a few minutes wondering if Serrano and her wife – who have sex three or four times a week – can possibly be happy if they never have sex.

When asked for their opinions on Wittmer’s sex life, the two women simply stated, “What the fuck?” and “I’ve definitely never thought about that and never will.”