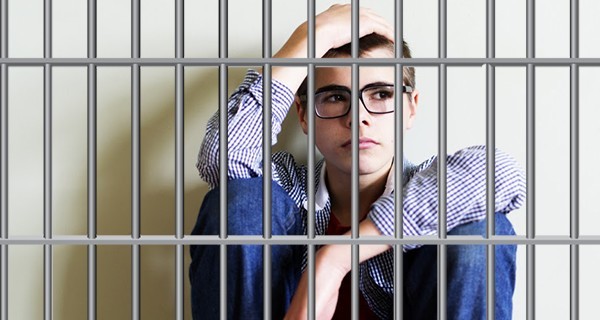 Adolescence is a confusing time for teens and parents alike, especially for young boys.

There’s so much change occurring: one day he’s a kid climbing trees and reading comic books and the next he’s a rebellious teenager being hogtied and thrown into the back of a van I bought from my uncle for $75. What an exhilarating experience for everyone involved!

I wanted to think I was ready to handle a teen boy, but I didn’t realize the rocky road I was in for. Caring for a teen is hard, especially while trying coordinate his return in exchange for a large sum of money from his uncooperative father.

Here are eight tips I learned the hard way about looking after a teenage boy:

1. The Range Of Emotions

Teens are prone to a wide range of emotions. For example, just in the last hour, this teen has gone from crying on the floor and begging to go home to shouting at the top of his lungs that when his father finds me he’s going to “cut my balls off with a dull butter knife.”

I’m positive that by dinner (my dinner, not his dinner, he’s not being given food, only paint chips), he’ll be mellow and agreeable and back to trying to buy his way to freedom. The hormones are out of control!

As much as you’ll want to be abreast of everything going on in his life, it’s best to give him room. Don’t be nosy; I learned this lesson the hard way when I asked what I thought was an honest question. I simply asked, “Do you think your father loves you enough to get me my fucking money before I gut you like a fish?!?” and he just started bawling.

3. Set The Rules In Advance

It’s important for a teen to know the rules and boundaries in the house. I first tried to lay down the rules by explaining them to him while he was tied up in the van. But sure enough, we get home, and he’s already breaking most of them.

Didn’t he understand what “No signaling to strangers meant?” I realized it would be easier for the both of us if the rules were written down so I scribbled them in blood on the walls of his makeshift cell.

(Pro-tip: at first I tried to use my own blood but BOY DID I GET DIZZY so instead I killed a stray cat and his blood has worked out just fine.)

Not just his door, but your door, because he’s going to try to get out at every opportunity. Even leave the bathroom door open. That’s when he’s most likely to make a run for it.

5. It’s All About The Phone

I knew that kids today were addicted to their smart phones but I didn’t realize it was this bad; it’s almost as if he’s fixated on finding his iPhone and using it to dial 911. I keep having to hide my teen’s phone in different places around the apartment – keep this between us but I buried it deep inside the bucket he’s been using as a makeshift outhouse.

6. They Think They Know Everything

This kid knows Minecraft front to back, and can even break jailbreak an iPhone, but ask him for the combination to the safe in his father’s office and he’s absolutely clueless!

7. The Lack Of Sleep

I haven’t been able to rest since the minute I forced him to live with me. He’s up all hours of the night either trying to escape or club me over the head while I’m dozing off. The lack of sleep is really taking its toll.

8. They Always Know Where To Find You

This one really surprised me – I actually had no idea he knew where we were located. Just when you think he doesn’t even care who you are, he calls the police and reminds you that he actually has a fantastically detailed memory. He really is maturing right before my eyes.