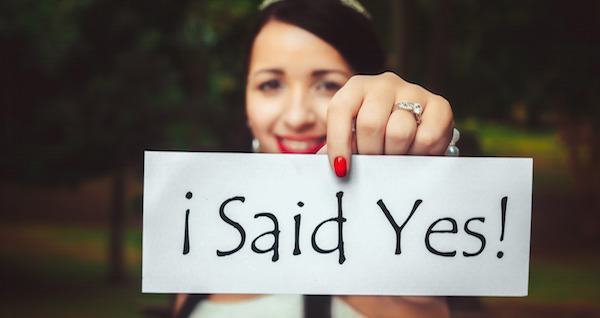 “And now my wedding cake tastes of regret.”

When I met my husband Andrew, I instantly fell for him, hard. I was 32 and had recently gone through yet another break-up. I was ready for the man of my dreams to enter my life, and lo and behold, there he was: sampling chicken dumplings next to me at Costco. As we bumped hands trying to grab the last warm dumpling in that particular round of samples, we laughed, and a spark took hold of me. In that tiny moment, I had no idea how my life would be changed forever.

Sitting here now, five years later, I have learned so much. Both about him, myself, and relationships in general. Nothing can prepare you for the wild adventure of falling in love and getting married. TV and movies have given us lots of ideas as to what marriage will be like, but the real life experience is far more complex than anything Hollywood can deliver! Here’s what they don’t tell you about marriage, that I wish I had known before taking the plunge:

You’ll Develop Your Own Interests
When you first fall in love, you do everything together. But once you say “I do,” you’re in it for the long haul, and eventually, your interests will diverge from your partner’s. When I first started dating Andrew, we played tennis together, took sculpting classes, and went on tropical vacations. But after getting married, I got really into scrapbooking, while Andrew took up night basketball.

I didn’t even know night basketball existed, until he told me about this league he wanted to be a part of. Apparently they play at night with a glow-in-the-dark ball. Sounded fun, and it was important to me that he had some time with “the boys.” I was sleeping, so what did I care?

Teamwork Is Everything
I was always a fiercely independent woman. So when Andrew asked me to open a joint checking account and pool our money together, I was wary. But he convinced me that we were a team, and that we could conquer the world together. And even though I had a lot more money than him, I was happy to share. While it’s important to maintain a sense of self, you’ll also need to make the effort to truly operate as a unit once you’re married.

Sometimes You Won’t Recognize Your Spouse
When you get hitched, you promise to stand by your partner both in good times and bad. So yes, I was expecting some bad days. But I didn’t realize that sometimes, you won’t even recognize your husband. For example when Andrew would get stressed out, he would get tense, angry, and slip into a distinctly southern accent. He was from Pennsylvania, so that made no sense.

When I asked him about it, he said it was just this weird tick he had when he gets riled up. I totally got it. When I’m depressed, I eat like a starving dog! We all have our quirks.

The Puppy Love Will Disappear
Everyone is always worried that after the honeymoon is over, the romance and passion of those early days will come to an end. I have to say that for me and Andrew, that didn’t happen! We were making love almost every night. The fire was burning strong.

But for us — something else happened. We had a puppy, and her name was Love, and she disappeared. I wanted to put up signs all over the neighborhood, but Andrew insisted that he would “handle it.” That’s when I knew trust was going to be the key to a lasting marriage.