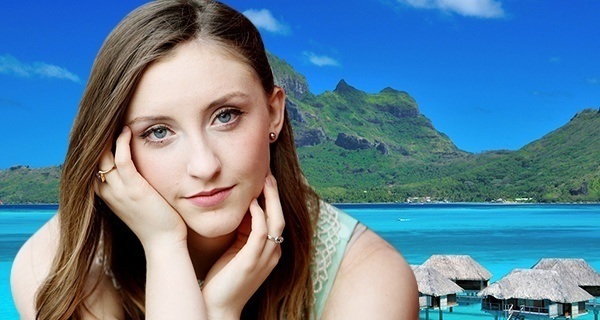 When Trump first announced he was running for president, we all treated it like one big joke. But now the scary reality that he really has a shot at the White House has sunk in. Even scarier than his chances is what America will become under the leadership of a bigoted autocrat who spews white supremacist rhetoric, blatant misogyny, and horrifyingly blunt xenophobia.

And all of this is why, if Trump wins, I will have no other choice except to move to Bora Bora.

Some of my friends have argued that if Trump becomes president, now is the time America needs people like me to stay here the most. But I just don’t see what good that’s actually going to do, especially when I have enough frequent flier miles to get to Bora Bora for free. It seems like I’d be staying here to prove a point, which would just be punishing myself twice. When you think about it, isn’t it better if I’m at least getting my hair braided on a beach of impossibly white sand before heading off on a jet ski tour of the island with a hot Australian bartender I met the night before?

Let me be clear: I’m not moving to the tropical coast of French Polynesia to take the easy way out. For instance, I only have enough frequent flier miles to cover my departure trip. The ambiguity of not knowing how I’ll cover my return is just something I’ll have to wrestle with on my own. I really don’t want to have to ask my parents to spot me since they’ll be continuing to pay rent for my apartment in New York, which is why I’m already exploring the idea of opening up my own restaurant on the island. Yes, it will be hard, but not as hard as watching that bigot run our country into the ground. Plus, I’ve always dreamed of opening my own business, and this might be the push I need.

Moving to one of the most breathtaking archipelagos in the world isn’t about being an opportunist who’s using a tragedy as an excuse to move to what is essentially paradise. Trust me, I’d REALLY rather not move to Bora Bora — I’m terribly bad at adjusting to new time zones, I burn easily, and on top of that, my tummy is sensitive to foreign food. However, if Trump becomes the leader of the United States, I am willing to risk all of that if it means I can live freely.

For those of you about to point out that I’d have to become a citizen or obtain a work visa, I assure you that I’ve already done my homework. As it turns out, it’s almost impossible to get these things prior to travel, but a lesson I’ve learned is that if you make yourself indispensable, people will find a way to keep you around. So I’m going to make myself indispensable to the people of Bora Bora. Maybe I’ll start working as a really good waitress at a beachside café, or maybe I’ll pick up yoga and become an instructor to a government official. Of course, there’s always a chance I happen to fall in love with a local and we get married. The point is that these are just three very doable ways to stay in Bora Bora permanently, and that’s only after thinking about this for 15 minutes.

To the critics asking, “If it’s so easy, why doesn’t everyone do it?” I say: because they’re too afraid to dream big.

If, after reading this essay, you still think I’m leaving my fellow Americans in the dust, I ask you to challenge yourself. What’s keeping you from moving to Bora Bora along with me? If you think about it for long enough, you’ll realize it’s fear. And if there’s one thing this election has taught us, it’s that we must never succumb to fear.

I mean, there’s probably not enough room for EVERYONE to move there — a country can only build so many oceanside cabanas — but nobody thought Trump would come this far either. Stranger things have happened.