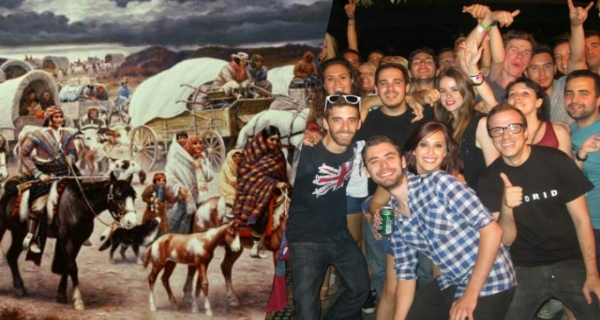 Changes to US currency often spark controversy, but for some of the students at the University Of Tennessee, it’s actually driven them to drink.

Several UT students were unhappy with the recent announcement that Harriet Tubman would be replacing former president and Tennessee senator, Andrew Jackson, as the face of the $20 Bill, and have organized a pub crawl/protest to express their displeasure. Dubbed “The Trail Of Beers” by UT senior and president of the UT chapter of Phi Upsilon Kappa, Craig Nelson (no relation to actor Craig T. Nelson), the pub crawl will span five different bars, each one representing one of the five Native American tribes forcibly ripped from their land and relocated on Jackson’s orders by way of the actual Trail Of Tears.

“Taking Andrew Jackson off of the front of the $20 bill is bogus,” said Nelson. “These SJW pussies make me sick. So what if Andrew Jackson owned slaves? Everybody did back then, besides, Jackson is obviously a black name – Samuel L, Michael, Randy, etc. – so chances are Andrew Jackson was part black and at that point it’s no different than a dude having his family come over and help with the yard work.”

“If they really feel the need to put Harriet ‘my husband can’t get a chub, man’ on some money,” added sophomore Brad Michaelson, “Why not make a new denomination like a $4 bill or something? AndyJack was a hell of a president and he deserves to be on the front of the $20 bill forever…unless they want to replace him with Paul Walker. I’d be cool with that.”

Nelson was quick to shoot down accusations that the pub crawl was just an excuse to go binge drinking on a Friday night and instead described it as “A peaceful demonstration by some young men and women hoping to preserve traditional American values” that just happens to be on a Friday and includes the ingestion of copious amounts of alcohol.

“The ‘Trail Of Beers’ is about more than just getting crunk as fuuuuuck, It’s about standing up for the traditions of our great nation! If we bow to these libtard democraps, putting Harriet Tubman on the $20 bill will just be the beginning. Next it will be Maya Angelou’s face on the flag, or changing the pledge of allegiance to say ‘One nation under Tyler Perry.’ where does all of this PC crap end?”

As for naming a pub crawl after one of the most horrible acts in American History, Craig Nelson and Brad Michaelson don’t find it offensive in the slightest. “Indians LOVED drinking, why do you think their faces were so red?” joked Nelson. “But seriously, if the Native Americans were cool with smoking weed out of peace pipes, they’d be fine with a few Jaegerbombs. If the Indians had treated the actual Trail Of Tears more like a Rush Week initiation, that shit would have been a whole lot more lit, and a whole lot less ‘terrible and one of the worst chapters in American history.’”

Nelson would also like to add that the chapter is planning a “Take Back My Dick” pub crawl next week, to protest the fact that Harriet Tubman is also a woman.