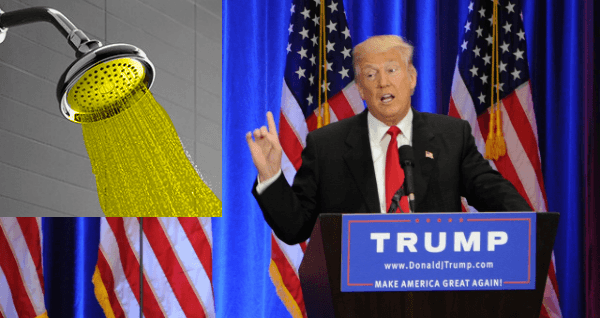 Many critics of President Trump’s new tax reform plan have called it “Trickle down economics” but the President recently told Sean Hannity that it’s more like “A shower of gold from above.”

“America has the highest corporate tax rate in the world and If you lower it all of that extra money is going to fill up the economy like a hooker’s bladder until it’s ready to burst,” continued Trump in an attempt to explain why tax cuts for the 1% would actually benefit the other 99%. “When that sucker pops, blue collar workers can just stand underneath it with their mouths open and let the sweet, sweet riches wash over their tongues.”

Trump went on to tell Hannity that the only thing standing in the way of tax reform is obstruction from the left. “This plan should have bipartisan support,” said Trump. “Our current tax code is like a UTI and my tax reform plan is the cranberry juice that’s going to flush out the system and allow everyone’s hard-earned wages to flow back into their pockets.”

“Instead,” the president continued, “the obstructionist Democrats would rather piss this opportunity away and let hard-working families keep more of their own money just to spite pee-uh-me, It’s sad!”

In the end, the president admitted that he couldn’t really do anything to stop people from calling his tax plan “trickle down economics” but that he hoped he could at least get them to modify the phrase a bit.

“Look, bottom line if you want to call my tax reform plan anything, call it ‘tinkle down economics’,” said Trump. “Because the IRS has been screwing America’s workers for decades and it’s about time they stop to take one of those awkward, sticky, after sex pees that goes everywhere but the toilet, except in this case the pee is money and everywhere but the toilet is the middle class.”

The president took to twitter just hours after Fox aired the interview to denounce it as “fake news” created by the liberal media.