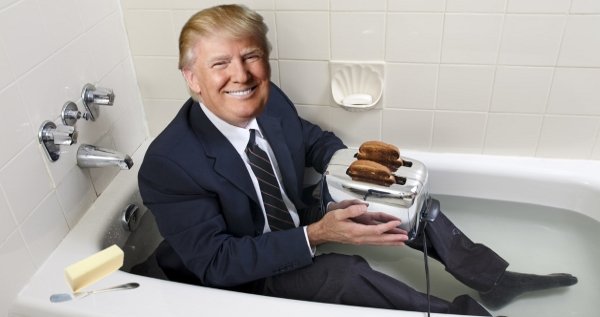 A recent visit to Fox News’ Hannity revealed some interesting things about the president, not the least of which was the commander-in-chief’s new favorite bath time activity: making toast. President Trump told Fox News host Sean Hannity that he owes the idea to the Vice President, who introduced him to the concept of operating a toaster while bathing immediately following his October visit to Puerto Rico.

“I had so much fun in Puerto Rico,” the president told Hannity. “It was like a — what do Spanish people call a party? — a fiesta! We had a fiesta, and I was throwing paper towels into the crowd, it was just a really good time, you know? Anyway, when I got back to the Whitehouse, I did what I always do when I get back from a foreign country: I took a bath.”

“So I’m sitting in the bathtub rereading The Art of The Deal,” continued Trump, “when I happen to look up and see Mike standing over me holding a toaster.”

The president told Hannity that he assumed Pence was bringing him a welcome home gift to celebrate his success in Puerto Rico.

“The poor guy was so excited to give it to me that he looked like he was gonna throw it right into the tub!” said the president. “I told him to just leave it on the floor next to the tub but that Mike — he’s such a thoughtful guy Mike Pence, just a terrific VP — he balances it right on the edge of the tub for me so that I don’t have to reach down to use it.”

The president admitted that at first he was skeptical about making bathtub toast but that eventually he came around with encouragement from Secretary of State Rex Tillerson.

“Rex and I were having lunch to discuss little Rocket Man when I told him about the toaster,” said President Trump, “I said ‘Rex, I don’t want to hurt Mike’s feelings but I’m more of a well done steak and ketchup guy than I am a toast guy’ but then Rex says ‘You know, Obama never made toast while he was taking a bath’ and that was all I needed to hear. I immediately ran to the bathroom with a loaf of bread and fired that sucker up!”

Since talking to Tillerson, President Trump says that he’s made toast while bathing “at least a dozen times” and even once while taking a shower.

“I told Mike that I tried the toaster in the shower and you should have seen the look of disappointment on the guy’s face!” said the president. “He must have been worried about the bread getting too soggy or something, he really is such a thoughtful guy.”

“In fact,” said Trump. “Mike’s so thoughtful that just the other day he brought me a hairdryer to plug in right next to the toaster. He told me it was so that I could save time by blow-drying my hair at the same time I was washing it. I told him ‘If I didn’t know any better, I’d think that you were trying to get promoted!’ and he just gave me a little smile like ‘You got me!’ And we both had a good laugh.”

Hannity finished out the interview by asking the president what kind of bread he prefers for his toast, a question that Trump answered with no hesitation whatsoever.

“White bread Sean, I only use white bread.”