Trump To Only Pardon White Meat On Turkey 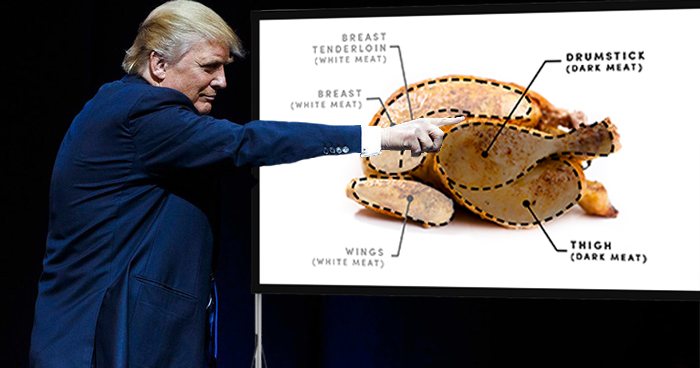 Press Secretary Sarah Huckabee Sanders announced earlier today that President Donald Trump plans on only pardoning the “white meat” of this year’s turkey during the National Thanksgiving Turkey Presentation. Using diagrams and extensive Power Point presentations, Huckabee clearly marked out which areas of the bird would live and which would suffer the, “wrath of the long arm of American justice.”

“The tradition of ‘pardoning’ the turkey during the presentation has been a consistent piece of the event since the first President Bush,” explained Toshina L. Jackson, Assistant Curator of the Reagan Library. “But to literally only pardon certain pieces of the bird based on the coloring of its meat not only bucks tradition, but a general high school level understanding of anatomy and biology.”

Top NAACP lawyer Jacob Pierson originally planned on filing a complaint but explained that when he, “really sat down and thought about it, the concept is so dumb that no court would ever hear it.” He continued, “What can we do other than blankly stare into the abyss of our democracy as a president has literally brought racism into a tradition that doesn’t even involve humans?” He concluded, “I don’t even know what to do with myself after today, does my profession even have merit?”

In a slew of early morning tweets the President attacked the Main Stream Media on the subject claiming that, “The media wants you to think this is RACE BASED, when really it’s TASTE BASED. #FakeNews.” Later he would send out multiple tweets claiming that the dark meat on the legs and thighs of a turkey are, “disgusting and don’t deserve a pardon, NO THANKS TRICKY TURKEY! #MAGA.”

At press time, President Trump had declared that at this year’s White House Jewish holiday celebration, he’s going to “put the ‘Christ’ back in ‘Chanukah.'”