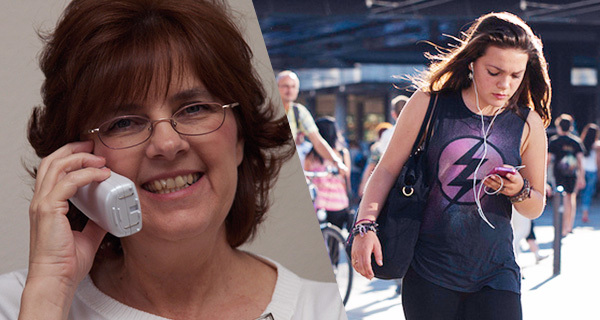 On Monday evening, 23-year-old Lucy Chesner called her mother to rant about something insignificant in the grand scheme of things, tragically realizing only later that her mother’s advice was actually helpful.

“I only have like two minutes to talk because I’m walking to the M train, but I just need to rant about something annoying at this new job,” Chesner poured out to her mother, Nancy Chesner, as soon as she answered the phone with a friendly, “Hi Lucy! How are you, sweetie?”

Chesner only recently moved to New York after taking a job at a staffing agency and is “trying to subtly prove to her mother that she can succeed on her own.”

“My lunch break isn’t until 2:00, and I always get hungry way before then,” Chesner complained to her mom, after successfully failing to inquire about her mother’s wellbeing.

Nancy Chesner, a mother of two who recently picked up an extra job in order to further support her children, listened quietly as her daughter ranted about how hungry she was all morning, trying to hold back tears at the thought of her daughter suffering in any way.

“Sweetie, remember the ideas I gave you when you moved to the city? Always keep a granola bar in your purse…” she lovingly responded.

Chesner successfully avoided her mother’s attempt to be helpful by replying, “Mom, I don’t need your advice.” Chesner reportedly felt she maintained the cool, aloof, mature demeanor she has been so desperately trying to uphold. “Thank you anyway, but if I need help, I’ll ask. I was just calling to rant.”

Unfortunately, Mrs. Chesner continued to give unsolicited advice. “Also, I think you should talk to your boss about this,” she said, and then gave her an idea about the best way to broach the issue to her supervisor.

Sources confirmed that Chesner was so wrapped up in blowing off her mother that she walked in the wrong direction of her train, saying with only a slight hint of condescension, “This always happens to me. I got distracted because I was on the phone with you.”

When Chesner explained which station she accidentally went to and where she meant to go, her mother, a former New York City resident, warmly suggested she take the E train instead.

“Thanks, but I didn’t ask for your advice. I can figure it out myself,” replied Chesner – a completely mature adult woman who has been self sufficient for four weeks. “I have to go. Love you,” she told her mother.

“Love you too, honey!” replied the Mrs. Chesner.

For completely unrelated reasons, the younger Chesner did in fact end up taking the E train, saving herself sixteen minutes. Her boss stated that the following day, Chesner “maturely and reasonably asked for her lunch break to be moved up to 1PM, and I was happy to oblige.”

Though Chesner briefly considered telling her mother the unsolicited advice had actually turned out to be “immensely helpful,” she eventually decided against it, saying, “I don’t want her to think she can just ramble on with great advice any time she wants to.”

Mrs. Chesner recently posted on Facebook that giving summarily dismissed advice to her daughter was the “proudest moment of [her] life.”