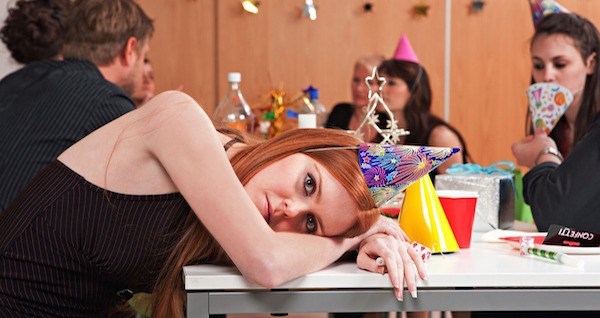 Pictured: The typical reaction to a bullshit birthday.

A Queens, NY woman who recently received an invite to her friend’s birthday party will spend the better part of the next two weeks attempting to come up with an excuse good enough to justify missing the event.

Despite being close friends for most of their adult lives, the celebration of a 34th birthday simply does not qualify as a good enough reason for Marisa Bruno to leave her apartment on a Wednesday night.

“I couldn’t believe it when I got the invitation,” recalls Bruno, 35, of Woodside. Having received an email earlier this month with a subject line reading “Help Kasia Celebrate the Big 3-4!,” which she looked upon with equal parts confusion and disgust, Bruno was discouraged to learn that the festivities would consist not only of a Korean barbecue dinner, but a private karaoke party to follow.

Distraught at the idea of having to transfer from a train to a bus to make it to a party celebrating what is, in her opinion, “barely even a real birthday,” Bruno will spend countless hours working tirelessly to come up with an excuse good enough to miss out on the festivities.

“It just seems so indulgent. Who celebrates turning 34?” Bruno asks. “Worse, who shows up to celebrate someone turning 34? I’m not going to take a train, then a bus, then walk six blocks just to make small talk with some asshole who thinks this party is a good idea.”

Having already used up “I have a migraine” and “My boyfriend has a migraine” to get out of brunch earlier this month, and unable to use the excuse of “working late” after losing her job last fall—a fact that her good friend is well aware of—Bruno will most likely be forced to pretend she’s contracted the norovirus to get out of this one.

“No one wants to ask too many questions about a virus that gives you projectile vomiting and diarrhea,” she explains. “And they sure as hell don’t want you turning up to their Korean barbecue dinner.”

When asked if she feels badly about not only missing her friend’s birthday celebration, but lying to get out of it, Bruno simply replied, “Honestly, no. Anyone trying to throw a karaoke party for their 34th should be prepared for everyone to hate them.”