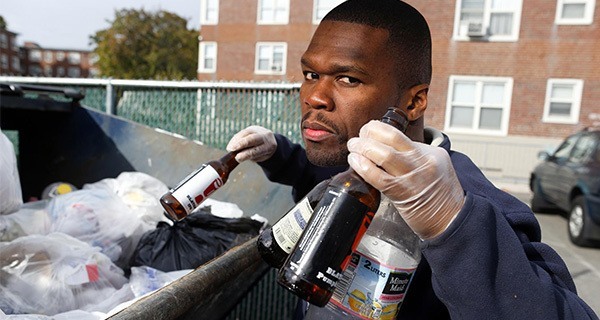 In a move to protect his finances in the wake of a lawsuit, 50 Cent has filed for Chapter 11 bankruptcy. While the rapper, legally known as Curtis Jackson III, hasn’t shown any signs of changing his lavish lifestyle, he is being slightly thriftier about it by taking advantage of Connecticut’s Bottle Bill, which gives consumers back five-cent deposits for recycled beverage bottles.

The 40-year-old recording artist reportedly dropped $17,000 on bottle service at Drai’s Beachclub in Las Vegas this weekend, but was was adamant about keeping all empty containers.

“When I saw all the bottles at the table,” said owner Chad Posternak. “I thought an employee was slacking on her duties, but 50 said, ‘Don’t worry, man. I asked her to leave them. Did you know you make five cents for each of those?”

Posternak also overheard Jackson asking friends to Venmo him for their share of the bill.

At the end of the night, Jackson approached the bar and asked a server if he could take a look in the recycling bin. “Look at all these empties—you’re sitting on a gold mine! Unless you’re planning on cashing in, mind hooking me up with some?”

Most of the bottles were from the party’s sponsor, Effen vodka, which Jackson also endorses. “Now I’m making money off Effen in two ways!” he exclaimed. “Hey, I wonder if I could work something out with Vitamin Water too.”

However, there was a slight snag in the plan: since Nevada doesn’t issue deposits for empty bottles, Jackson had no choice but to bring the bottles home to Connecticut. That morning, he loaded 33 completely full recycling bags onto his private jet. “Who’s bankrupt now?” he wrote in an Instagram post.

Jackson was spotted the following day carrying a bag of nickels to his local bank.