Op-Ed: It’s Adam And EVE, Not Adam And Jen From HR 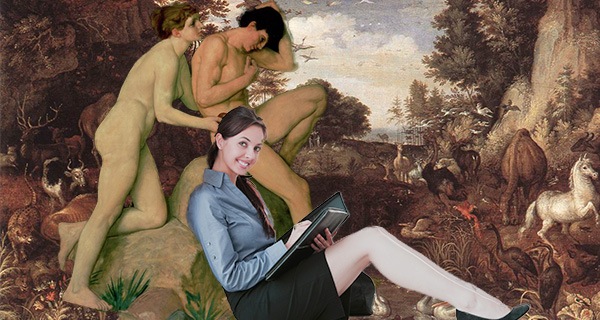 Okay people. I wake up every morning with only one prayer in my head and song in my heart: to be a good Christian. But try as I may to keep an open mind, I have to draw the line somewhere: the Bible clearly says Adam and EVE, not Adam and Jen from HR.

I don’t really understand why there’s even any debate about this. Genesis 2: 22-2 explicitly states, “And the rib that the Lord God had taken from the man he made into a woman and brought her to the man.  Then the man said, ‘This at last is bone of my bones and flesh of my flesh; this one shall be called Woman, for out of Man this one was taken.’”

You know what that passage says absolutely nothing about? Jen from HR. And I hear the argument that it also doesn’t really explicitly say anything about Eve either, but that is clearly the implication here, and any other interpretation is a bastardization of the text.

I know people in our modern society love Jen from HR. I know it’s “cool” and “trendy” to interpret the word of God to be more inclusive, but I don’t change my ideas about the Lord just because it’s en vogue. When I look at my “How would Jesus be?” bracelet every day and really consider the question, the answer is 100% not fangirling over Jen from HR. From Genesis to Revelation, there isn’t one single mention of that modern day Bathsheba, and that is NOT up for interpretation. If that makes me a stick-in-the-mud, then so be it.

People say to me, “What harm could it possibly do to consider that in a modern world, Adam could love someone like Jen from HR? She has rockin’ shoes and knows all the good happy hour specials in the greater Kenosha area!” But when God said, “Male and female he created them. God blessed them, and God said to them, Be fruitful and multiply,” he most certainly did not mention Jen from HR, and it’s not up to us to question why that is.

Adam and Eve are the holy bedrock of the institution of marriage, and at the end of the day we must protect that sanctity against people like Jen from HR.

Take my husband for example – sure, he’s friends with Jen from HR. They watch football together and joined a bowling league and even took a weekend long road trip to Chippewa Falls this summer. And the reason that doesn’t bother me is because I know he’s just as fully committed to being in a strong Christian marriage as I am, and as Leviticus tells us, that 100% doesn’t include Jen from HR.

I’m pretty sure she’s a lesbian too, so that’s nice.