Johnny Depp’s Career Found Dead At The Age Of 32 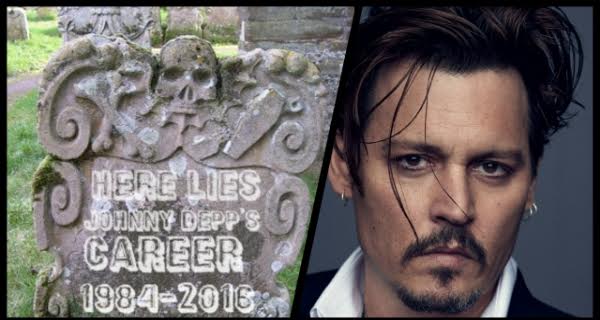 The career of beloved Pirates of the Caribbean star Johnny Depp was found dead Saturday morning at the actor’s Hollywood Hills mansion. His career was 32.

So far there is no official cause of death but most of Depp’s friends and critics believe that his long-time addiction to terrible scripts like The Lone Ranger coupled with the pain of low Rotten Tomatoes scores such as Mortdecai’s 12% may have driven the actor to commit career suicide.

“His career was in a dark place,” Said Depp’s Mortdecai co-star Gwyneth Paltrow. “He would tell me every day that it was getting harder and harder for him to get out of bed and come to set. He had lost his will to work.”

“Johnny asked me on the set of the fourth Pirates movie ‘if I was going to end my career, how would I do it?’” confessed Geoffrey Rush. “At the time I thought it was just one of those weird conversations you sometimes have in between scenes on a movie set, you know like ‘If you could go back in time and kill Hitler, would you?’ or ‘If you could have sex with any Golden Girl, living or dead, which one would it be?’

“Now I realize it was probably a cry for help,” continued Rush. “I wish I’d answered the call.”

Other Depp collaborators, however, don’t think suicide likely; and some, like Tim Burton, even suspect foul play. Burton – who has cast Depp in no less than eight of his films – has gone so far as to accuse fellow director Kevin Smith of killing Depp’s career with his latest film Yoga Hosers.

“I warned Johnny not to work with Smith again after that walrus monstrosity,” wept a noticeably distraught Burton upon hearing of the death of Depp’s career. “He didn’t listen though, and he let that bearded, hockey jersey wearing fuck murder his career and then piss on the corpse.”

Smith shot back with his own accusation that Burton is indeed the one to blame for the death of Depp’s career.

“Hey man, did you see Dark Shadows? How about Alice In Wonderland?” asked Smith, “After those pieces of cinematic dog shit, Johnny’s career was pronounced clinically dead and put on life support. All I did was pull the plug.”

“Johnny’s career had been sick for a long time,” says Freeman. “He tried to hide it, but occasionally he’d make a movie like the Ninth Gate or the Libertine and people would know something was wrong with him. By the time Alice Through The Looking Glass came around, his career was too weak to fight anymore. After that it was just a matter of time…those of us close to him knew that Johnny’s career could go any film now.”

Depp’s career leaves behind 45 feature films and the narration for Deep Sea 3D. A memorial service for Johnny Depp’s career will be held Friday at the Viper Room in West Hollywood. Depp requests that people send alcohol and cigarettes in lieu of flowers.