Why I’m Killing All Your Favorite Celebrities: An Editorial By God 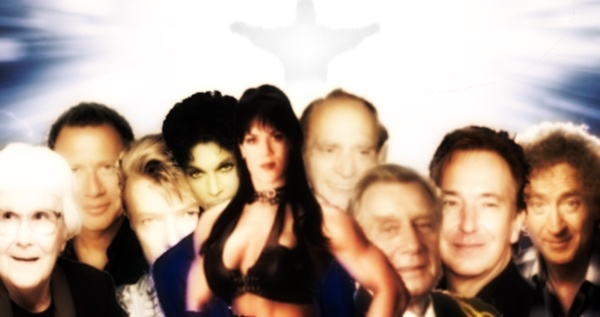 Hello, my children; it’s me your almighty creator, God. I just wanted to take some time to address the complaints I’ve been getting this year about famous mortals dying.

First off, shame on you for worshipping these false idols in the first place! I, your Lord – maker of Heaven and Earth – should be the only object of your unconditional love and adoration. You think Muhammad Ali was “The GOAT” just because he was good at hitting things ? Bitch please, I hit Sodom and Gomorrah so hard they aren’t even there anymore! Screw Prince, I am the KING and my kingdom is eternal which is more than I can say for Minneapolis (spoilers).

Even though I don’t owe you humans any explanations whatsoever (working in mysterious ways is kinda my MO) I am a kind and merciful God – or at least I have been since book two – and if it will put your minds at ease, my children, I’ll tell you why I’ve been killing all of your favorite celebrities.

Let me start by addressing the big one: David Bowie. I hated to take him from you guys, I really did, but I needed Bowie, along with Prince and Lemmy, to play in a band I’m putting together for the Afterlife Battle Of The Bands that they hold every year in Asgard. Satan beat me last year with an Elvis/Tupac combo that blew the roof off of Valhalla and I need the perfect group if I want to win my title back. He was too good for earth anyway.

As for Gene Wilder and Alan Rickman, I grabbed them so that they could act together in a movie that I’m having Gary Marshall write and direct. Eternity is boring AF and sometimes all-powerful deities want to shut our brains off and veg out just like you mortals do. Sadly the wi-fi up here sucks ass or I’d just watch Netflix. Don’t worry, the guy that runs Comcast is coming up on my list very soon.

Arnold Palmer came up to help me with my golf game, Kevin Meaney and Gary Shandling are here for when I need a laugh, and as for Chyna and Lou Pearlman, you’re welcome!

A lot of the others were just getting too damn old and I needed to clear a space for all of the up and comers that are being born. David Huddleston, Kenny Baker, Mr. Fuji, Leonard Cohen, and Robert Vaughn were all in their mid-to-late ‘80s, and Abe Vigoda, Bob Elliott, George Gaynes, and George Martin were in their friggin ‘90s (no, you don’t need to have a heart attack, I didn’t say George R R Martin. I want to read Winds of Winter as much as the rest of you fuckers). If you’re not ready at ninety then you’re just being greedy.

Did I miss anyone important? I’ve taken so many famous souls this year I’ve started to lose track.

Oh, that’s right, I almost forgot Harper Lee! Let’s just say that I gave her more than enough time to write a follow up to To Kill A Mockingbird and when she finally did it suuuuuuucked. That one was a mercy killing.

So in closing, remember that you are all my children, and I love you. I don’t call these souls up to paradise to hurt you, but because it is simply their time or I need them for my own personal entertainment. Buuuuuut you should still smarten the fuck up and stop fighting because there are a few weeks left in 2016 and I’ve had my eye on Paul McCartney for a while now, just saying.