The One Question Every Female Celebrity Absolutely Must Answer 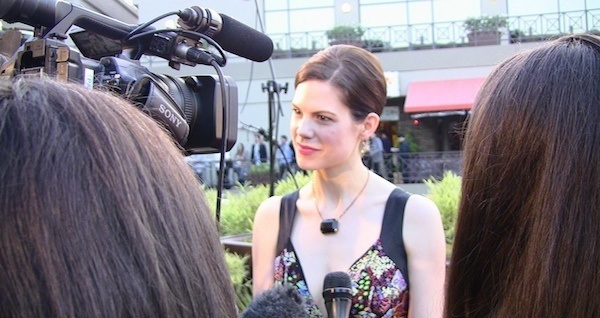 At this year’s Oscars, it seemed like a new trend finally took hold: a large number of red carpet reporters followed the #AskHerMore movement, which encourages interviewers to ask female celebrities about their achievements, instead of just asking about their dresses, appearance, beauty regimen, and how they balance work life with being a mother.

I’m pleased with this progress, but I really think we need to go further. Of course I want to know about a lady’s work and artistic vision, but there’s a far more pressing question that needs to be asked. I need to know: is she a feminist?

I can no longer sit here and watch television or film without knowing if the people playing the female characters are feminists. How am I supposed to enjoy Fuller House if I don’t know where Candace Cameron stands on equal pay? How can I possibly watch old episodes Mike & Molly until I am clear on how Melissa McCarthy feels about maternity leave? And don’t even get me started on The Mysteries of Laura. Am I really supposed to view this program without solving the mystery of whether or not Debra Messing wants to shatter the glass ceiling?

Bottom line, I simply will not rest until I know the feminist status of every single female celebrity. Amber Heard. Is she a feminist? What about Diane Lane? Marisa Tomei? Quvenzhané Wallis. Are they feminists? Mischa Barton. Where has she been? And has she been a feminist this whole time? The woman who plays Flo in the Progressive commercials. Has anyone taken the time to ask her if she’s a feminist? No? Get it together, media!!!

And it’s not just actresses. How about musicians? Do you really think, in 2016, it’s possible to sing along to “Don’t Cha” without knowing if every member of the Pussycat Dolls fights for lifting the tampon tax every day of their lives? What about female Vine stars? Is a six-second video really worth my time if the young lady in it doesn’t care about getting more women employed in STEM fields?

It’s really quite simple. Red carpet reporters, entertainment journalists, and radio DJ’s: when you interview a female celebrity, it’s so easy to #AskHerMore! Just ask her if she is a feminist! And don’t just stop there with the simple yes or no question. I want you to dig deep. Don’t let her get away with just saying “I love all people, women and men,” or, “I am a humanist.” She doesn’t even know what the term humanist means, and I hate her. Push her harder. Go for the jugular.

And it’s not just a simple matter of her confirming that yes, she is a feminist. I absolutely must know: is she a fake feminist? Is Beyoncé just pretending to be a feminist? Does Paris Hilton really care about women’s rights, or is she just trying to be trendy? Trust me, we need to get to the bottom of it up front, because I have learned many, many times that just because a woman says she is a feminist doesn’t mean she actually is one!

Over and over, I have been crushed when a female celebrity, claiming to be a feminist, says or does something that’s not one hundred percent socially woke.

We must be diligent. I am counting on you, media, to monitor the words and actions of every female celebrity who has previously identified as a feminist. We need to make sure they aren’t faux, because there’s nothing worse than a lady who talks the talk but can’t walk the post-modern third-wave intersectional feminist theory walk. It’s not that complicated!