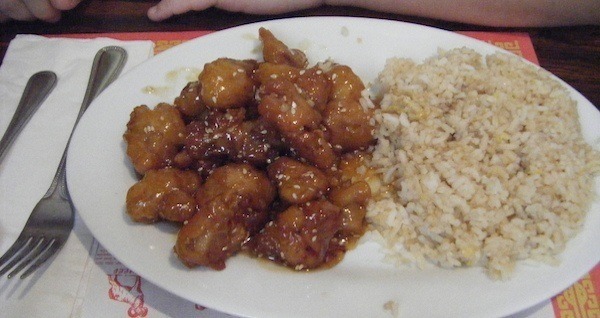 Sources report that on Saturday evening at Fong’s Garden, the only Chinese restaurant in Rexburg, Idaho, the Cooper family attempted to eat their food with chopsticks for a record two minutes before asking their waiter to bring out forks.

The family of four—Mick Cooper, his wife Nancy, and their two children Josh and Maddie—frequents Fong’s Garden for its traditional cuisine, festive ambiance, and option of traditional American cutlery.

“We love Fong’s because it’s authentic Chinese. The Orange Beef, the fortune cookies, those paper lanterns hanging around—that’s the authentic stuff,” said Mick, who used the word “authentic” 12 more times that evening, once while conversing with another patron at the urinal.

The family – who were there celebrating Maddie’s 14th birthday – came to Fong’s determined to use their chopsticks for the duration of the meal. The heroic foursome spent two whole minutes diligently attempting to get even a single bite of lo mein into their mouths before flagging the waiter down and asking for silverware.

The Coopers are just one of many American families who appreciate and value different cultures, right up to the point where it interferes with their comfort in any way.

“I was quite impressed,” recounted their waiter, Jamie Chen. “Most customers request forks as soon as they enter the restaurant. Some even bring their own. But these guys really made a go of it. I might sound crazy, but I honestly believe that one day maybe their grandchildren, or great-grandchildren, will make it through an entire appetizer before caving.”

Used as ancient utensils across East Asia since as early as the Shang dynasty, chopsticks are made in a variety of materials such as bamboo, porcelain, and ivory, and are used in traditional forms of cooking and eating. What they do not allow is the shoveling of large volumes of food into one’s mouth at high speed, which like many American families, is the Coopers’ preferred approach to eating.

Still, the family is eager to learn more about Chinese culture at Fong’s Garden.

“I practiced pronouncing ‘General Tso’ for when I ordered,” said Nancy, who got too nervous and ended up furiously pointing at the menu and muttering, “I’ll have…the General…taah….so. The tssssk…uh, number 46.”

However even after their waiter brought forks out, the Coopers still requested to keep their chopsticks at the table.

“We like to stick them in our mouths and make walrus faces at each other,” their son Josh said, as he scrolled through the hundreds of walrus-face pictures the family took that evening on his iPhone.

Following the meal, the Coopers repeatedly read their fortunes aloud, laughing at the inaccurate grammar and sentence structure.

“We like to have a good time while being respectful and observing the local culture,” said Mick, as the family bowed to the hostess on exiting the restaurant.