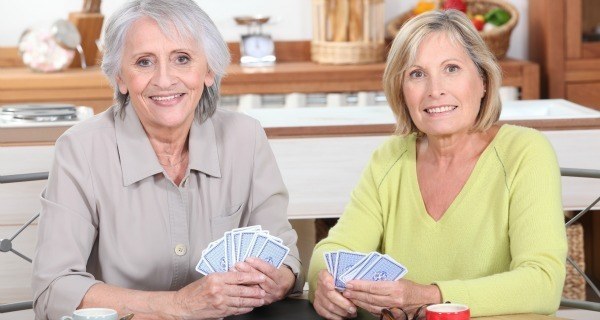 Pictured: Aunt Beth and “Roommate” Carolyn In Their 1 Bedroom Condo

The Epstein family dinner was rocked on Thursday night by the realization that their aunt Beth’s long-term “roommate,” Carolyn, may actually just be her roommate.

After 33 years of bringing Carolyn to the monthly family potluck, the Epsteins assumed that the two were life partners, but when the women arrived with a man named Dave in tow this past week, the family was left scrambling to re-evaluate their previously held conclusion.

When the two women moved in together in the late eighties, the family was admittedly uncertain about the nature of their relationship. “But once they got their second cat together sometime around ’97,” said Adam’s wife Emma, “we figured the deal was sealed.”

“I mean, they live in a one bedroom condo!” Adam said. “Like, yeah, I guess there’s a futon in the living room, but they’ve lived there for over thirty years! Is someone pulling out the futon every night? We’re not crazy for thinking that was just a cover, right??”

Adam also noted that Beth had brought Carolyn as her plus-one to his office holiday party every year for the past decade, where she was introduced simply as “Carolyn” with no qualifier. He mused, “It does seem like if they were really just roommates, you’d say ‘this is my roommate, Carolyn,’ or something, right?”

He further elaborated that the two sent out a joint holiday newsletter every year, seemingly leaving little doubt as to their couple status.

The situation was further complicated by Beth’s refusal to acknowledge Dave as anything other than her “new friend.” Though the family admittedly enjoyed Dave’s company at the potluck—describing him as “kind of a goof,” “a good guy,” and “still really confusing the situation”—they struggled to pick up clues as to whether they had been mistaken about Beth and Carolyn for the past thirty years.

While Dave kissed Beth on the cheek during appetizers, he called Carolyn “baby doll” sometime around dessert, at which point the Epsteins were once again in the woods.

Later in the evening, 13-year-old Toby was assigned the mission of stealing Beth’s phone to look at her speed dial list. Though initial reports assuaged confusion by confirming that Carolyn indeed topped the list at number one, things became hazy when it was noted that mystery Dave was in fact listed at two.

When asked is he’d ever considered just asking Beth to clarify the situation, Epstein responded, “Absolutely not.”

Matriarch Emma attempted to clarify things once and for all by asking Beth how she had met Dave. To the family’s surprise and relief at finally having some semblance of an answer, Beth responded, “Online.” Adding yet another twist later in the evening, Carolyn clarified that they had met Dave through Craigslist whilst attempting to sell their futon.

The major break in the case came towards the end of the night when Adam noticed the bottle of wine had a card attached to it, written from Beth and Dave. The whole family seemed to breathe a collective sigh of relief at finally having a somewhat substantial answer.

However, at press time Beth had posted on Facebook that all three adults plan to head to the Sandals Montego Bay resort together this winter on vacation, after which the Epstein family announced they will officially cease “ trying to ‘get it.’”