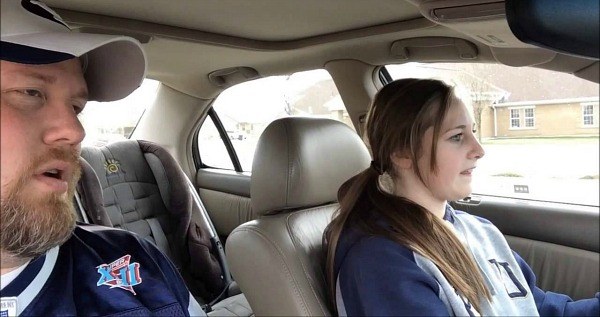 An awkward and uncomfortable standstill between a father and his adult daughter was reached inside the front seat of a 2009 Hyundai Elantra earlier this morning, after the simulated sex track from rapper Notorious B.I.G.’s album, Ready to Die, began playing as the pair sat stuck in traffic, a source reports.

Returning home from a trip to their local Home Depot, 24-year-old Wendy Nixon and her father, Jerry Adkins, 46, were reportedly traveling along Texas highway I-35 when their car was suddenly forced to stop upon reaching traffic. “He was helping me find window treatments,” Nixon recalled. “I just wanted to seal a drafty window, but I guess sometimes bad things do happen to good people.”

Engaged in pleasant conversation in an effort to pass the time, a natural lull in the exchange revealed the unmistakable sound of two rappers acting as if they were fucking one another within the well-mic’d confines of a professional recording studio.

“Oh my God,” a distraught Nixon stated, burying her face deep into her hands at the recollection. “I don’t want to talk about it.”

Left to decide whether to skip the track, pretend she couldn’t hear it, or just feign ignorance – she chose the latter – hopefully leading her father to believe that she doesn’t even know what sex is, despite having a young toddler of her own. A paralyzed Nixon embarrassingly endured one minute and 32 seconds of Biggie Smalls and Lil’ Kim loudly moaning to completion while seated next to the man who taught her how to double-knot her shoelaces.

“I just froze, I couldn’t think of anything, ” she said. “I realize that there’s a lot more important things going on in the world right now but honestly, this is the worst thing that has ever happened to me and I feel like I am going to die.”

Luckily for everyone involved the ordeal did eventually end without incident, although Nixon was admittedly tempted to drive her vehicle into oncoming traffic several times on her way home.