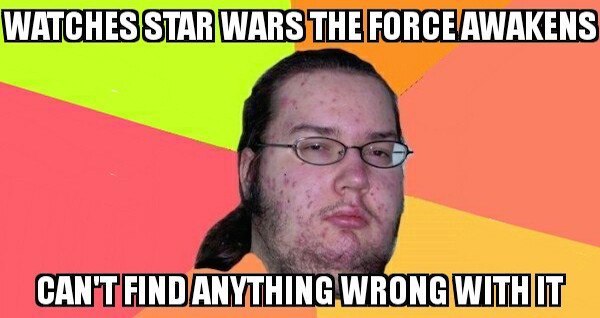 Internet blogger Eugene Gluckman shaved his neck today after finding nothing in The Force Awakens to complain about.

Gluckman, who goes by the username fireflyfan1138 and is known for mercilessly ripping apart comic book and sci-fi movies in his online reviews, was preparing to flame the new Star Wars movie on Reddit, when he suddenly realized he had nothing bad to say.

“I went on the Pirate Bay last night and got a leaked torrent,” explained Gluckman. “Then I sat down with a bottle of Mountain Dew Code Red and some Cool Ranch Doritos to hate-watch it, but it ended up knocking the fedora right off my head!”

Gluckman—who was actually wearing a trilby—was taken aback when he couldn’t find a single fault with the film, going so far as to rate it 10/10 and stating he “would watch again.”

“I was so sure it was going to suck,” said the movie fanatic and creator of the 17-part YouTube video, “How George Lucas Ruined My Life.” “Made by Disney and directed by J.J. Lame-brams with SJW-friendly black and female characters? I was fully expecting a raped childhood, but instead BB8 raped my heart.”

Gluckman’s newly shorn look comes after realizing that he no longer has a place among Reddit’s hairy-necked commenters, after non-ironically enjoying a piece of mainstream commercial entertainment. While he accepts the necessity, however, he’s not happy with the result. “I’m going to look like such a douche canoe in my YouTube videos,” he moaned. “Who’s going to take my Gamergate rants seriously with such a babyface? What am I going to run my fingers through while I’m updating my My Little Pony tumblr?”

Gluckman does admit, however, that some things will be easier now that he doesn’t have his neck beard. “It won’t get in the way of my vape pen anymore,” he shrugged, “and when I record my anime podcast Wi-Fi Waifu, I don’t have to worry about it rubbing against the mic and making a rustling sound.”

If the whole ordeal has taught Gluckman anything, it’s to not judge a movie based on its trailer or his own expectations. “I’m going to try to have a more positive outlook for upcoming movies,” vowed  Gluckman. “Except Batman V Superman. Zack Snyder can go fuck himself.”