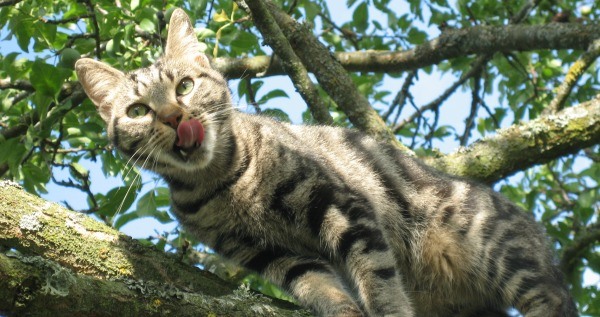 “We’ll be run out of business! Do you think I know how to rebrand?” Exclaimed the old man. “When we were ‘branding’ in the first place, ‘brand’ wasn’t even a verb yet. That’s how long we’ve been rescuing cats out of trees in this town!”

In Dayton, Indiana, “Grab ‘Em By The Pussy Cat Rescue Service” is a mainstay of the community, a mainstay whose origin story will warm your heart. According to local lore, one sunny summer day in 1972, the town mayor woke up, yawned, stretched, threw up a little bit, and went to feed his cat, Haverford St. Catfish. But Haverford was nowhere to be found. Panicking, the mayor looked in every room in his mansion, plus the front and back yards, but he could not find his curious best friend anywhere.

Knowing that he could not possibly carry on without the type of inadvertent emotional support one can only receive from a beloved animal companion, the mayor put out a press release and posted it at the community center. “Please find my cat!” it pleaded. “Large reward.”

When the rest of the town saw this notice, they knew they had only one choice: band together. And band together they did. Mick ran straight home to grab his ladder. Binoculars Bonnie took out her binoculars. Long-Armed Larry started stretching his long arms, and they all piled into Mrs. Harrison’s station wagon.

Before too long, Binoculars Bonnie spotted Haverford St. Catfish in the tallest tree in the center of the town square. Mrs. Harrison, who had driven military vehicles in Vietnam, pulled the station wagon right up in front of the large sycamore. Mick propped up his ladder on top of the car and held it steady while Long-Armed Larry climbed to the top. The rest of the town watched from the ground with bated breath when, with a mighty stretch of his left arm (which was even longer than his right arm), Larry scooped up Haverford and tossed him into the safety net the firefighters had set up below. Everyone smiled, applauded, hugged, and introduced themselves to people they didn’t know. The mayor cried, “Thank you! I am ever so grateful! Now back to running this town.” And before he left, he handed Mick a check for $15,000, which Mick used to start “Grab ‘Em By The Pussy.”

It really gave the whole community a renewed sense of purpose (one that you really just can’t find in too many places these days), and they’ve never looked back. Until now.

“Why, for over forty years we’ve been grabbin’ ‘em by the pussy!” yelped Mick, his youthful exuberance barely recognizable through his mental anguish. “Now some reality TV douchebag says it about human women and we’re fucking poison!”

“My son is about to graduate business school! He was going to join me as a partner!” Mick continued, his eyes bugging. “Now I don’t know what’s going to happen…” he added wistfully, glancing over at mockups for a new logo, which read “GRAB ‘EM BY THE PUSSY & SON.”

“I just think…” and his tone became somber. “If it could happen to us, who else could be brought down by this? ‘Fuck ‘Em In The Butt Anti-Smoking Awareness Group?’ ‘Build That Big Old Wall Schoolyard Improvement Company?’ I just… I don’t know. I don’t think I know how to live in this world anymore.”