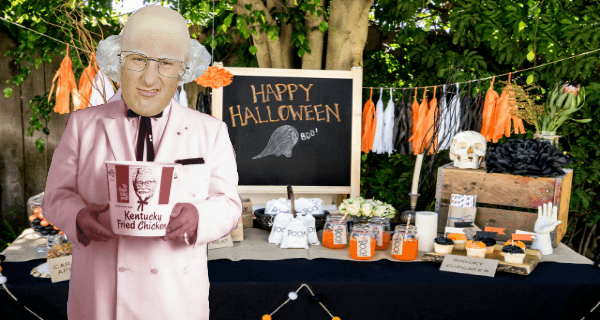 When Donald Munson first got an Evite to his friend’s Halloween party he was ecstatic. “I had a great idea for a costume,” said Munson, “Colonel Bernie Sanders! I mean it’s hilarious, right? Bernie Sanders dressed as the KFC guy?”

However, things quickly went south for Munson when he got to the party and no one knew who he was dressed as. “People started coming up to me going, ‘Hey Colonel Sanders, where’s your goatee?’ They just didn’t get it.”

Upset that no one understood his costume, Munson tried going around to various partygoers and declaring, “My new Five Dollar Fill-Up won’t break the bank the way I’m going to break up the Wall Street banks!” Unfortunately, they looked at him like he had two heads—“a costume that undoubtedly would have gone over better”—and went back to their beers.

Around the three-hour mark when Munson had all but given up hope, a woman dressed as Hillary Clinton approached him. “I got excited and thought that someone had finally figured out how clever my costume was,” said Munson, “But unfortunately she thought I was Mr. Burns from the Simpsons. How do you get jaundiced billionaire out of an old Jew dressed as a southern dandy? I was crestfallen.”

Sadly, even the party’s host, Seth Teperow, couldn’t figure it out. “I came over to introduce some people to Donald, and I couldn’t for the life of me remember who he was supposed to be. When I guessed a cowboy Woody Allen, he just threw his hands up in the air and walked away muttering something about Philistines.”

Donald stayed until every other guest had left the party, hoping desperately for even the tiniest acknowledgement of his genius, but none came. Defeated, Munson finally left vowing to go with something simpler next Halloween. “I’ll be something even an idiot will be able to get, like the Incredible Hulk Hogan or the Christopher Walken Dead,” said Munson.