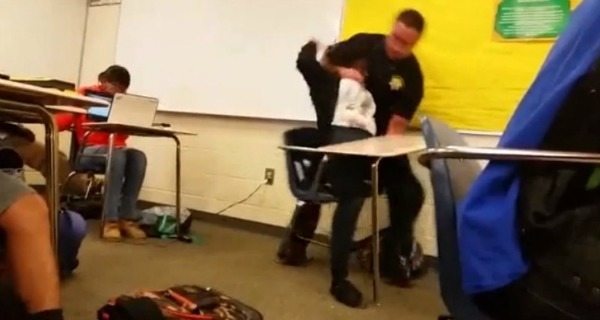 Yesterday, a video surfaced of a South Carolina police officer slamming a black female student to the ground and dragging her out of the classroom. The cop has been identified as Ben Fields, who said he “felt threatened” by what he perceived to be the student’s clear intention to receive an education.

“I was acting out of self-defense,” said Fields, who has worked as a resource officer at Spring Valley High School since 2008. “The way she was quietly sitting in her desk, failing to escalate the situation gave me a reasonable suspicion that she was gonna learn something if I didn’t act quickly.”

A spokesperson for the Richland County Sheriff’s department says Fields has been placed on administrative leave, but asked for the public to refrain from judgment. “Officer Fields was working with the facts he had, which told him there was a very strong chance this particular student was utilizing our public school system. We’re sorry for any damage this may have caused her, but she gave up her rights the second she refused to abandon her agency to learn.”

Classmates say the incident began when the teacher, Robert Long, asked the girl to put away her cell phone. Said Mr. Long, “Look, I know not all students are trying to learn in my classroom. Most are perfectly normal kids who hate school and actually help me maintain my standing as a completely ineffective educator. But this one stayed quiet, didn’t even raise her voice. As soon as I realized she was hell-bent on not disrupting my class, I called in for law enforcement to properly derail my math lesson.”

The disturbing confrontation has prompted the FBI to open an investigation into the matter to see if Fields violated federal law or if he did indeed have reasonable suspicion that the student was planning to acquire knowledge. While the situation is developing, the footage captured through witnesses’ cell phones appears to show the student calmly attending class, which could easily have rapidly developed into full-blown mastery of a lesson plan, had Shields not acted when he did.

“Every day, police put their lives on the line to protect our citizens,” said Director of the FBI James Comey. “One second, a black student is sitting attentively at his or her desk, and the next thing you know, they’re studying at home, maybe even applying to college. Even more unsettling is the long-term impact, where kids with a casual interest in history, let’s say, become adults who are capable of changing the system we designed to keep them down in the first place.”