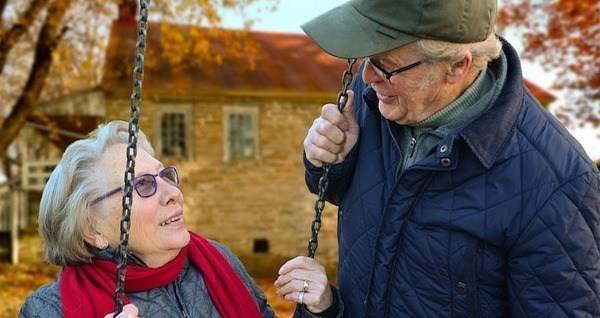 According to the Lakeshore Daily News, local Minnesota couple George and Carol Wilson have been passing the same yeast infection back and forth for over six unforgettable decades. Local news sources became aware of the incredible love story when George surprised Carol with a special vow renewal ceremony at their church, to mark the day they acquired their mutual genital infection those many years ago.

“I remember it like it was yesterday,” said Mr. Wilson, a smile creasing his weathered but still-handsome forehead. “We were staying at a Sturgeon Bay bed and breakfast—we had only been married a few hours—when Carol sniffed her fingers and shouted out the bathroom window to me that she thought she had the crotch rot.”

“He said when he agreed to marry me, he agreed to marry all of me, yeast in my ham cave and all,” Mrs. Wilson interjected, gazing lovingly at her husband. “When he had no problem stirring that soupy mess down there, I knew I had found someone special.”

The happy couple fell in love in high school in the early nineteen-fifties. George, the track team’s star runner, fell head over heels for the shy, bookish Carol. The two were married shortly after graduation. “He just looked so fucking hot in his little running shorts,” remembers Carol, a fond, faraway look in her eyes. “His calves made me feel like I’d sat in a puddle.” George, meanwhile, has never forgotten Carol’s mysterious teenage allure. “Even then, she had a massive pair of bangers,” he smiled, squeezing Carol’s hand tenderly in his. “Just massive.”

According to close friends, the only time either George or Carol didn’t have a yeast infection in the following years was when George was called into the reserves in ’61.

“They were some of the saddest, albeit least itchy months of my life,” Mrs. Wilson told emotional reporters. “But I had a yeasty again within hours of George coming home. He got right in there like a rat up a drainpipe.” At this last part of the telling, one journalist in attendance openly wept.

The adorable couple says that if they make it to 65 years of marriage, they’ll embark on a much-anticipated trip to Yellowstone National Park. “We’ve always had a thing for nasty outdoor sex,” he admitted, as his children and grandchildren looked on, proudly. “And believe me, if Carol doesn’t have the muff thrush before we go, by God, she’ll definitely have it after.”