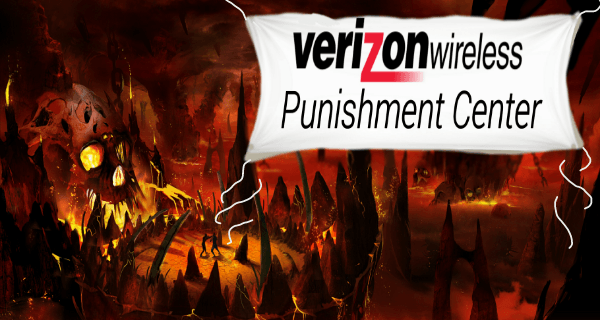 Proof that not all deals with the Devil end badly, telecommunications juggernaut Verizon Wireless announced today that starting in January they will assume exclusive corporate sponsorship of Hell. “We’re really excited about this new opportunity to grow our brand,” said VZW CEO Daniel Meade. “We’ve spent decades making people associate our brand with Hell on earth, so now we’re keen to corner the ‘Hell in Hell itself’ market as well.”

Though Meade admits that Hell was actually his second choice for Verizon’s expansion into the afterlife, he’s happy that things turned out the way they did. “I originally wanted to make a deal with Heaven, but our market research showed us that the majority of our customers already think of us as a form of everlasting torment, so it worked out for the best. Also, turns out, Jesus is a Sprint guy.”

Satan reports that he was also initially reluctant to make a deal. “Hell has never had a corporate sponsorship and I was afraid of looking like a sellout,” said the prince of darkness. “I was also concerned what a partnership with Verizon would do to our image. I mean, even Hell has standards.” Beelzebub soon changed his mind when he saw the lofty sum Verizon was offering, however. “Hell has been in a recession ever since the late ‘80s, when Heavy Metal album sales started to decline,” he explained. “This partnership is just what I need to get Hell back into the mainstream.”

As expected, the Verizon corporate sponsorship does come with a few strings, and Hell will now officially be known as The Verizon Wireless Punishment Center. Satan reports that Verizon has already started making infrastructure changes – anyone sent to the Punishment Center will now face certain Verizon-specific tortures, including an eternity of being bounced back and forth between various incompetent customer service representatives, and a misleading data plan that always goes over because it turns out you weren’t actually connected to WiFi.

The Great Dark Lord, however, assures everyone that these changes are mostly cosmetic, and won’t affect the day to day suffering that the souls of the damned have come to expect. “At the end of the day, it’s still the same old Hell. We still have a lake of fire and demons who stick red hot pokers up your ass; they’ll just be playing Verizon’s smooth jazz hold music while they do it.”