Cthulhu Officially Endorses Donald Trump, “He Has What It Takes To Destroy The World” 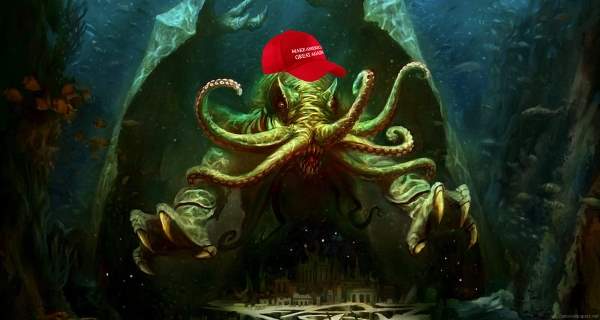 “My ultimate goal is to bring about the end of all life on Earth.” said Cthulhu with a voice that caused any eyes and mouths within a five-mile radius to start bleeding profusely, “Trump is the only candidate I can see achieving that.”

The Great Old One went on to say that Trump was already doing a good job of unraveling the very fabric of reality without even setting foot in the White House.

“For the first time ever, a former WWE special referee, Pizza Hut spokesman, and reality TV star is just months away from being the leader of the free world,” said Cthulhu as his words caused craniums around the globe to rupture and cave in on themselves. “Even I couldn’t orchestrate a more complete and utter breakdown of society, and believe me, I’ve tried.”

Indeed, the son of Nug did, in fact, try to erase all of existence earlier this year by way of his own bid for the Presidency but was quickly shut down during the primaries by Trump himself.

“During the first Republican debate I was preparing to feast on both the flesh and souls of my rivals,” explained Cthulhu, “when suddenly Donald Trump points at me and says ‘Doesn’t this guy, doesn’t his face look like a cuttlefish?’ That was it, that was all it took to send my whole campaign into a tailspin that it never recovered from.”

“From that moment on I was Cuddly Cthulhu and the only feasting I did was on Donald Trump’s dust as he blew by me in the polls. A Trump nickname — as Lyin’ Ted and Little Marco can tell you — is a death sentence, I had no choice but to drop out.”

“I’m not bitter about losing, though,” continued Cthulhu, vibrating his vocal chords at a brain liquefying frequency.

“I don’t care whose finger is on the button as long as it gets pushed and at the end of the day everyone on Earth has suffered and died with lungs full of blood and anuses full of pus-like discharge. I truly believe with all of the hearts I’ve devoured that Donald Trump is our best chance at World War III.”